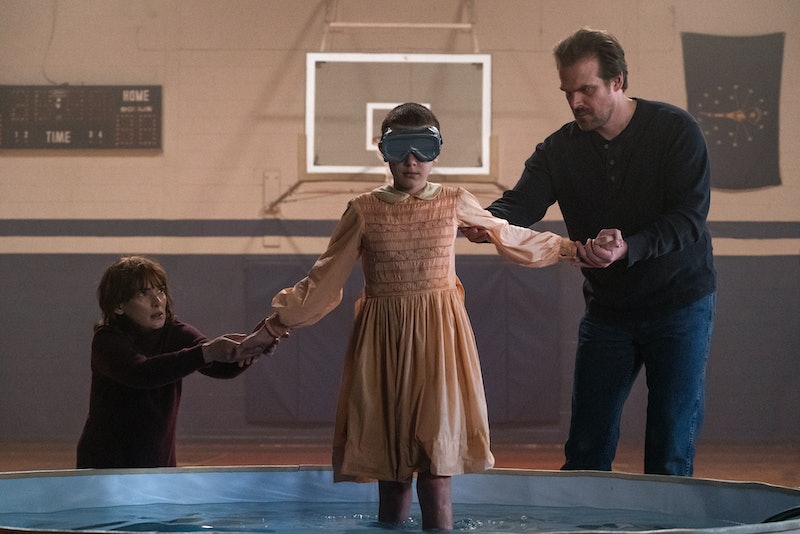 Eleven couldn't find her way back to the Upside Down without a sensory deprivation tank, so it's no shame if you need a Stranger Things Season 1 recap before you delve back in for Season 2. Everyone needs a road map sometimes. And one drawback of Netflix's all-at-once model is that, if you marathon an entire season, it's an extra long wait for more episodes. Instead of Season 1's eight hours having been spaced out over the course of eight weeks, most fans probably devoured them over the course of one weekend in July 2016 — which means it will have been over 15 months since those viewers' last trip to Hawkins, Indiana by the time Season 2 premieres on Friday, Oct. 27.

Those first eight episodes were stuffed to the gills, containing superpowered little girls, faceless monsters, government conspiracies, dark dimensions, and more '80s movie references than you could shake a stick at — from Stand By Me to E.T., from The Goonies to Aliens. The Duffer Brothers (the twins who created the series) have said that they want Stranger Things 2 to be the Empire Strikes Back of their series… and let's hope they're right, and it bears more in common with that Star Wars middle chapter than Attack Of The Clones.

Here's what went down in Hawkins last year:

Season 1 introduced viewers to the fictional town of Hawkins, Indiana, and its many residents: soon-to-be-missing kid Will, his older brother Jonathan, and their mother Joyce; his best friend Mike, and his older sister Nancy; Nancy's boyfriend Steve and her bestie Barb; Will and Mike's Dungeons & Dragons-playing friends Dustin and Lucas; and police chief Jim Hopper. Their idyllic 1980s suburban life is interrupted when a monster breaks out of a nearby scientific laboratory and starts terrorizing the town, including kidnapping young Will. His determined friends start referring to the monster as the "demogorgon," after a creature from their favorite role-playing game.

The demogorgon's arrival also marks the appearance of strange young girl, known only as Eleven — or, as the boys start calling her, El — who escapes from the same lab. A group of nefarious scientists, led by Dr. Brenner, are willing to kill to get her back. Mike hides Eleven in his basement, and she eventually informs the friends that Will has been taken to a parallel dimension called the Upside Down.

Joyce To The World

Will's mother discovers that she can communicate with her missing son through a string of Christmas lights, and refuses to believe that he's dead… even when a body is found in the local quarry that looks just like him. Indeed, Hopper discovers that the corpse is a fake, and his ensuing investigation takes him to the Hawkins laboratory.

When the demogorgon kills Barb, Nancy embarks on her own investigation with Jonathan, who's harboring a crush on her. They find an entrance to the Upside Down in the woods, and Nancy ventures into the other dimension before nearly being killed by the monster. They realize that the creature is drawn to blood, and they (along with a skeptical Steve) try to set a trap for it in the Byers' house, but it evades their snare.

This Is Your Brain On Drugs

Eventually, it's revealed that Eleven is the child of a subject of Project MKUltra, a real-life CIA program that experimented on people with hallucinogenic drugs throughout the 1950s and 60s. Eleven's mother was unknowingly pregnant with her while undergoing the experiments, resulting in Eleven being born with telekinetic powers. The CIA tried to use those powers to spy on the Russians — but Eleven ended up accidentally opening a portal to the Upside Down instead, allowing the demogorgon through into our universe.

Now You See Her, Now You Don't

Eleven, Mike, Dustin, and Lucas track the demogorgon to their local middle school, and Brenner and his scientists track Eleven there as well. Eleven telekinetically kills most of the scientists, the demogorgon kills Brenner (or does it?), and Eleven confronts the demogorgon and disintegrates it — although she herself vanishes in the process.

The Rescuers Upside Down Under

Meanwhile, Hopper and Joyce venture into the Upside Down through a portal in the lab, and find Will trapped in that dimension's version of the library, with some sort of tendril down his throat. They bring him back into our universe, and everybody has a happy ending (with even an MIA Eleven getting her favorite Eggo waffles from Hopper, who leaves the breakfast food in the woods for her)… until Will excuses himself from the dinner table and goes to the bathroom, where he vomits up a slug while the room around him temporarily flashes into the Upside Down and back again.

What's wrong with Will? Where did Eleven go? Will there ever be justice for Barb? Find out when Netflix debuts all nine episodes of Stranger Things 2 on Oct. 27.