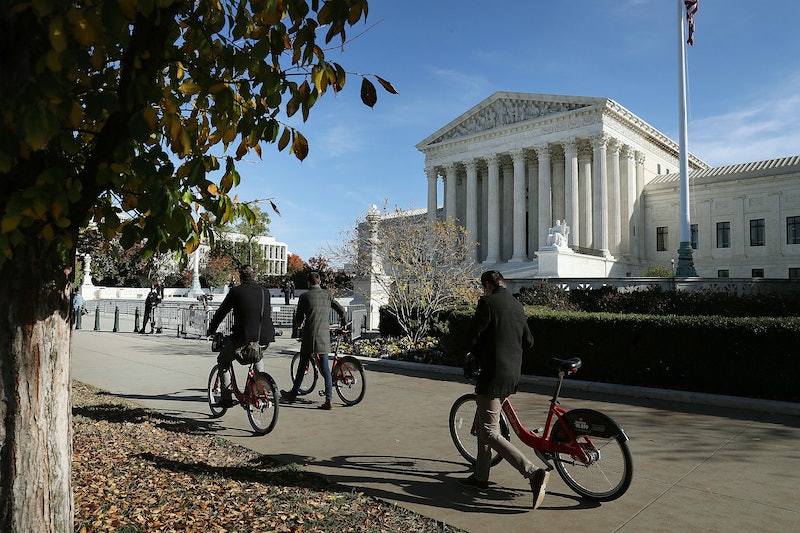 The justices of the Supreme Court are used to speaking carefully. After all, their job revolves around precisely interpreting the often-complex letter of the law and making clear decisions based on their interpretations. It's not every day, though, that the F-word turns up in the Supreme Court and the justices have to try not to say it, as happened with a recent trademark case that appeared in front of the nation's highest court.

Designer Eric Brunetti has been trying to trademark his "FUCT" line of clothing, but the U.S. Patent and Trademark Office has repeatedly denied his request, as NPR wrote. This decision was based on the fact that the brand's name “would be perceived by a substantial segment of the public as the equivalent of the profane past participle form of . . . perhaps the paradigmatic word of profanity in our language,” as government lawyer Malcolm Stewart said, per The Washington Post.

The government trademark office has the right to bar trademark protection for words that are considered "immoral," "shocking," "offensive," and "scandalous," as NPR wrote. But questions remain. For example, Justice Ruth Bader Ginsberg asked how one determines which words fall under that umbrella. Or as all of the nation's top legal minds struggled with, how do you discuss a case about the F-bomb without saying the F-bomb, as CNN wrote?

They had different strategies, as CBS News described. Justice Samuel Alito referred to it as "the word your client wants to use," whereas Justice Stephen Breyer went for "the word at issue." Chief Justice John Roberts took things into a higher verbal dimension, saying that it was the "vulgar word at the heart of the case," according to CBS News. Justice Neil Gorsuch, on the other hand, was even more avoidant.

"There are shocking numbers of ones granted and ones refused," Gorsuch said, referring to previous trademark requests on words that "do look remarkably similar" to vulgar language, according to CBS News.

“I don’t want to go through the examples,” Gorsuch continued. “I really don’t.”

One such example that gave Brunetti hope, though, was the 2017 Supreme Court case regarding The Slants, an Asian American band who had been barred from using the name that they chose, according to NPR.

The U.S. Patent and Trademark Office had decided not to allow The Slants to use that name because it could "disparage ... or bring ... into contemp[t] or disrepute" any "persons, living or dead." The Supreme Court, however, overturned that decision and allowed The Slants to use their name of choice, because, as Alito put it in his decision, "the disparagement clause violates the First Amendment's Free Speech Clause," according to NPR.

Now, Brunetti is arguing that the office's ability to block trademarks for words that it deems "scandalous" or "immoral" also amounts to an "unconstitutional restriction of free speech," as CNN wrote. After all, Brunetti says that FUCT actually stands for "FRIENDS U CAN'T TRUST," and the fact that he lacks a trademark is costing him a lot of money, since others are still allowed to produce and sell knockoffs without the legal protection for Brunetti that a trademark would confer, according to CNN. Now, he'll just have to wait until the summer for the justices to make their decision — which will also likely feature some interesting ways of avoiding the F-bomb.