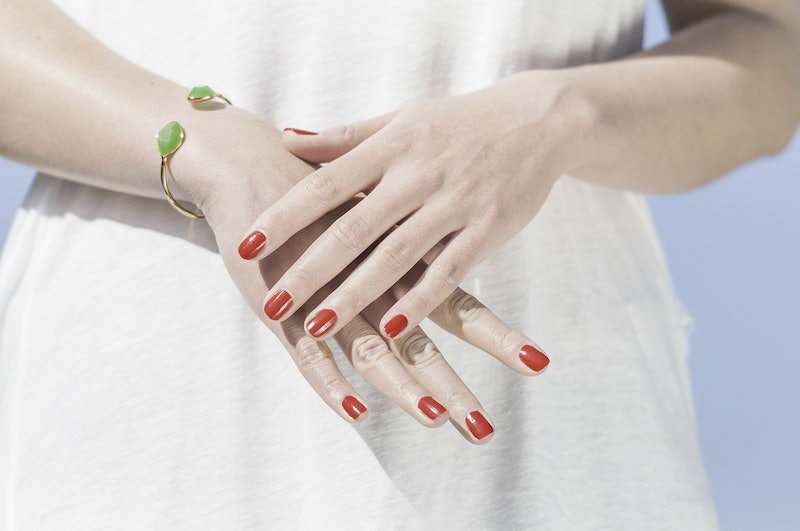 "Stylish", "cute", and "would go great with that new dress I bought" are not generally terms one would associate with tampons, and yet Canadian-based artist Annelies Hofmeyr recently created tampon nail art that is somehow all three.

The nails, which Hofmeyr posted on her Instagram page, have a white background, fake (duh) red blood stains, and blue tampon strings that seem like they would get caught in things, but still look cute.

From the time we’re small, people who menstruate are taught to be ashamed of our periods. We're told they're icky, so we learn to keep them hidden, squirreling away tampons in our sleeves, avoiding eye-contact in the feminine care aisle, never mentioning periods in mixed company except to explain to our coworkers that no, it’s not “that time of month, Jared, I just want that spreadsheet I asked for a week ago, thank you.” Increasingly though, people like Hofmeyr are rejecting this taboo, and taking proud ownership of their periods.

Hofmeyr told Bustle that her tampon nail art was part of a yearlong project on Instagram called The Period Project, in which Hofmeyr would post "a piece of period adornment, once a month, mid-cycle." Other posts include a red-stained pad folded into the shape of a rose, a tampon covered in rainbow sprinkles, and leopard print spotting in a sanitary pad.

She started the project after Instagram took down an eight-second video of her dancing to Leona Lewis' song "Bleeding Love" in a pair of period pants (which is the only way I will be ushering in my menses from now on.)

"The inspiration behind the nail art concept is the popularity of the art form itself (especially on Instagram)" she explained. "As a conceptual artist I like figuring out the most efficient way to get a message across and that often means working in a format that is non-threatening."

The movement to normalize periods is not new. In 1978, Gloria Steinem wrote a satirical essay for Ms. magazine that imagined what the world would be like if men could menstruate and women could not. Steinem imagined it would be an enviable, used as proof of men's superiority. "Men would brag about how long and how much," she wrote.

Normalization has gained traction recently. In January 2016, Barack Obama became the first President to talk openly about menstruation when he and 27-year-old YouTube star Ingrid Nilsen discussed why tampons and pads are taxed as luxury items in 40 states. “I suspect it’s because men were making the laws when those taxes were passed," the president said. In India, some companies are even offering employees First Day of Period leave, and while this is both good and bad, it is a significant step forward in de-stigmatizing periods.

We still have is still a very, very long way to go before people are not penalized socially and economically for menstruating. Until then, we have to continue to advocate for more equal and accessible healthcare, and open up the conversation to normalize periods. And if our nails can look cute while doing it, all the better.