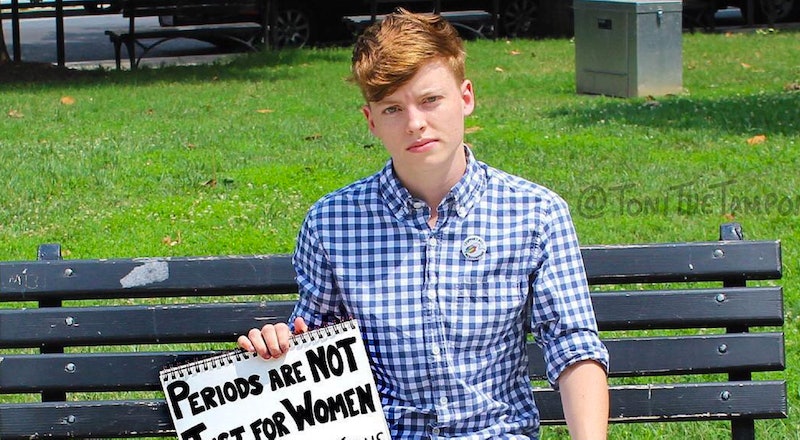 The way we talk about periods — or more often, don’t talk about them — is telling about period stigma as a whole. Additionally, who we choose to include in those cultural conversations in turn sheds a light on who are leaving out. In an effort to make sure those conversations are inclusive of everyone, one artist posted a powerful Instagram photo about periods as a reminder that women aren’t the only ones who menstruate.

Cass Clemmer, who identifies as transgender and uses the pronouns they/them, is an artist and advocate working to end period stigma. Clemmer created a character called Toni the Tampon to make teaching menstruation accessible to kids of all genders. Their work includes a coloring book called The Adventures of Toni the Tampon: A Period Coloring Book, which follows Toni and Toni’s other period product friends. However, the book, meant to affirm anyone of any gender who menstruates, received some backlash. This in part prompted Clemmer to share their story on Instagram.

Clemmer told Huffington Post about a conversation with a close friend, which served as a reminder that many still don’t understand or consider what menstruation is like for people who are trans or non-binary.

“We had been friends for awhile and she’s a feminist activist, but when I realized that not even she had considered what it was like for people like me to experience bleeding on a (ir)regular basis I knew that I had to go public with my story to help shift the mindset around tying periods to womanhood and femininity. Not all people who menstruate are women, and not all women menstruate.”

Clemmer’s story, shared on Instagram, sheds a light on how period problems affect people of all genders.

Gender is a spectrum and the way we talk about periods should be mindful of that. Not all women menstruate because not all women are cisgender. While supposing what menstrual health care might look like if men got periods may highlight the problematic ways in which women’s bodies are governed, it ignores the reality that there are men who menstruate. It ignores the existence of trans men.

Last year, a gynecologist’s tweet using the hashtag #IfMenHadPeriods prompted an unanticipated conversation about gender. While the tweet started as a thread about topics like men mansplaining periods, it evolved into a talk about how trans men are often excluded from conversations about menstrual health. As ACLU staff attorney Chase Strangio told Upworthy, “The refusal to accept and recognize that there are men who menstruate and get pregnant and there are women who have penises and don't, contributes to the relentless assault on trans people in courts, legislatures and on the streets.” Just one more reminder that words really do matter.

Promoting healthy conversations about menstruation starts by including kids, of every gender, in the conversation. If you’re looking for another reason why we need to teach people of all genders about periods, let Clemmer’s response to their work be the first. “My favorite reactions,” Clemmer told Huffington Post, “...are and always will be the response, I get from fellow trans and non-binary folks who have written to me to say that because of my poem, they feel less alone in the world. For me, there’s no greater motivation and honor than that.”

If we want to end period stigma as whole, we need to make sure we’re not leaving anyone out of the conversation. A future where healthy conversations about menstruation are a given entails taking small steps to be more inclusive right now. We have people like Clemmer to thank for helping us get there one step, one Instagram post, at a time.