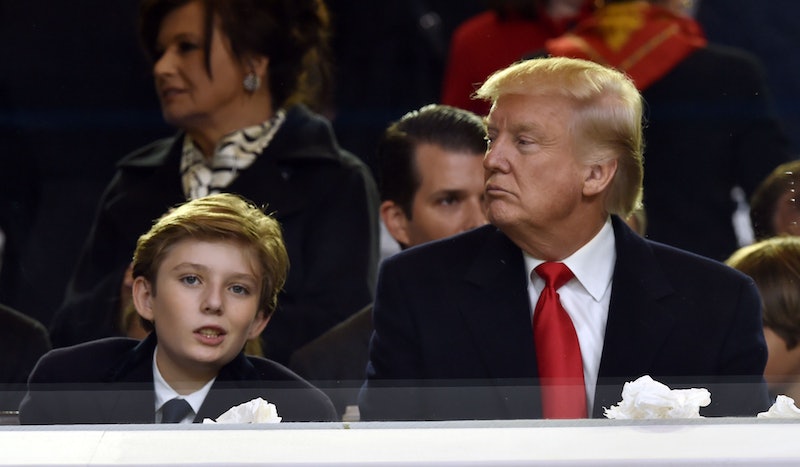 Saturday Night Live writer Katie Rich mocked Barron Trump, the youngest and most low-profile of President Trump's children, in a tweet during the inauguration on Friday. It elicited widespread outrage, and now Rich has been suspended from the show, according to The New York Times. This is an important reminder that, as bad as Trump himself may be, making fun of his 11-year-old son isn't cool. Like, at all.

Rich sent the tweet out on Friday, writing that Barron will become America's "first homeschool shooter." Needless to say, the blowback was swift and strong, and not just because Barron isn't actually homeschooled. Many people rightly pointed out that it’s really not okay for adults to make fun of a grade schooler, especially in such a crude manner. Furthermore, a whole lot of conservatives noted, accurately, that this was the precise kind of mockery that liberals vehemently condemned when it was aimed at President Obama’s children eight years ago.

Rich apologized profusely and deleted the tweet, though it's unclear whether she did this before or after her suspension.

Opponents of Trump have gotten used to mocking his other children, of course, but that is a whole different ball game. Ivanka, Eric, and Don Jr. are all adults, first and foremost. There's a qualitative difference between an adult teasing another adult (permissible in certain circumstances) and an adult teasing a child (never okay). Furthermore, the eldest three Trump kids all had official roles in their father's business enterprises, and were intimately involved with his campaign. They have been willing enablers of their father and his terrible behavior.

But Barron hasn't. It would be difficult to argue that, at the age of 10, he's even capable of fully comprehending his father's political and historical significance. No, Barron is essentially an innocent bystander. Making fun of him is a cheap shot and, on a fundamental level, is just plain mean. And being mean to people who don't deserve it is the exact sort of behavior many liberals criticize Trump for.

Rich messed up — but she wasn't the only one. The right isn't free of blame here: Many conservatives and Trump supporters presented Rich's lone tweet as evidence that the entirety of the American left had decided that it was cool to tease Barron. This was disingenuous and dishonest — Rich's tweet was an anomaly, not the norm, and she received tons of criticism on the left for it.

Nevertheless, this is an important reminder for those of us who oppose Trump. If we're going to use humor and mockery to diminish his stature, we have to make sure we're focusing on the right target, and that we're making helpful criticisms. Teasing Barron is not only unhelpful, it's counterproductive. It creates needless controversy and, more importantly, distracts from the countless of substantive concerns surrounding Trump and his presidency.

Thankfully, there are plenty of legitimate reasons to make fun of Trump and his team of lackeys. Let's focus our jokes on that, and leave Barron out of it.