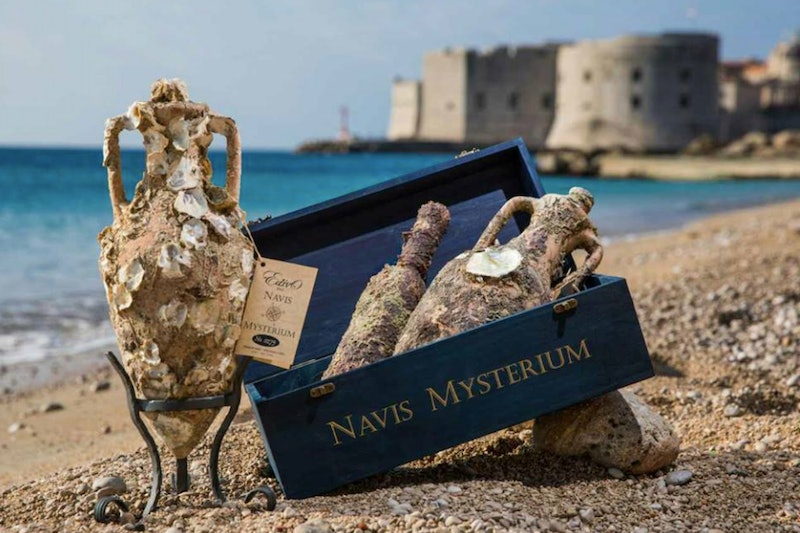 Like many people, I enjoy a good winery. Also like many people, I am currently freaking out a very particular winery — not necessarily because of what the wine tastes like, but because it is an underwater winery, which is legit everything my secretly mermaid-obsessed self has ever wanted out of life. Called Edivo, the winery is located in Drače, Croatia, about an hour north of Dubrovnik; its wine-making process involves aging the wine not in a regular old wine cellar, but in the Adriatic Sea. Heck. And yes.

The key to this aging process isn’t fancy gadgets or shiny, new wine-making technology; it’s actually something that dates back as far as the Neolithic period (just, y’know, around 10,200 BCE to somewhere between 4500 and 2000 BCE. No big deal): Amphorae. Made of clay and lined with wax, amphorae were “the ancient world’s standardized way to transport wine, olive oil, and other pride liquids,” according to Vinepair. Although they’re believed to have been invented by the ancient Egyptians, they later became a staple of ancient Greece and Rome, particularly for wine. Even if you’re not familiar with the word “amphora,” you’d probably recognize one if you saw one — the bottom is round, the neck is long and narrow, and there are two handles on the sides. In ancient Greece, they were often decorated, making them as beautiful as they were useful; in Rome, however, they were a little more utilitarian.

For the curious, this is an ancient amphora:

And lastly, here is what the finished wine from Edivo looks like:

Edivo’s owners, Ivo and Anto Šegović and Edi Bajurin, first began the venture in 2011 with a lot of research and the first batch of wine; then, their first amphorae were dropped into the sea in late 2013 and early 2014, according to the winery’s website. "The idea of [immersing] bottles and amphorae under the sea seemed feasible, but it took time to check a lot of things and explore," wrote the owners.

And it looks like that exploration has paid off; they’ve got their process down pat now. According to Brides Magazine (who — correctly, I believe — identify Edivo as a fantastic honeymoon activity, because underwater winery), Edivo’s wine begins its aging process on dry land. Then, it’s bottled in glass, covered in a few layers of rubber to keep the seawater out, put inside an amphora, and submerged in the Adriatic Sea. Vinepair notes that a sunken boat is used as a wine cellar, which is maybe the most magnificent thing I have ever heard; the amphorae hangout in said sunken boat in locked cages (to prevent theft) for 700 days, with their watery confines keeping them at 15 to 17 degrees Celsius, or about 60 degrees Fahrenheit. Divers check on the wine every 10 days to make sure everything is… shipshape. (Sorry.) (No, I’m not.)

Lonely Planet reports that the amphorae are thought to give the resulting wine, called Navis Mysterium, a particular aroma — one that’s somewhat reminiscent of pinewood. And, of course, the bottles are quite beautiful; after the amphorae are pulled up out of the sea, they’re decorated with seashells and coral, making them look like actual sunken treasure.

They’re not cheap — the Independent pegs their price tag in British pounds at £270, which means they’re likely around $350 USD — but, well… maybe that’s understandable, given everything that goes into these bottles, even if it’s outside a lot of our budgets.

If money is no object for you, though, you can do more than just order yourself a bottle of Navis Mysterium; you can visit the winery itself. For the less adventurous, the Edivo Wine Bar provides a gorgeous setting in which to drink what I will persist in calling mermaid wine (because look at it, you guys) — and for the thrill-seekers, Edivo also offers “a unique experience of visiting one of our underwater cellars,” according to its website. On request, the winery will organize a supervised dive, allowing to see the whole sunken boat wine cellar thing in action.

Now if you’ll excuse me, I have a vacation to book…

More like this
TikTok's Butter Board Might Be The New Cheese Plate
By Emma Carey
On TikTok, Tinned Fish Date Night Is The Latest Viral Food Obsession
By Emma Carey
Deliveroo Is Selling Lotus Biscoff Cinnabons Now
By Darshita Goyal
8 Completely Unserious Tips To Make Your Cuffing Season A Success
By Ginny Hogan
Get Even More From Bustle — Sign Up For The Newsletter