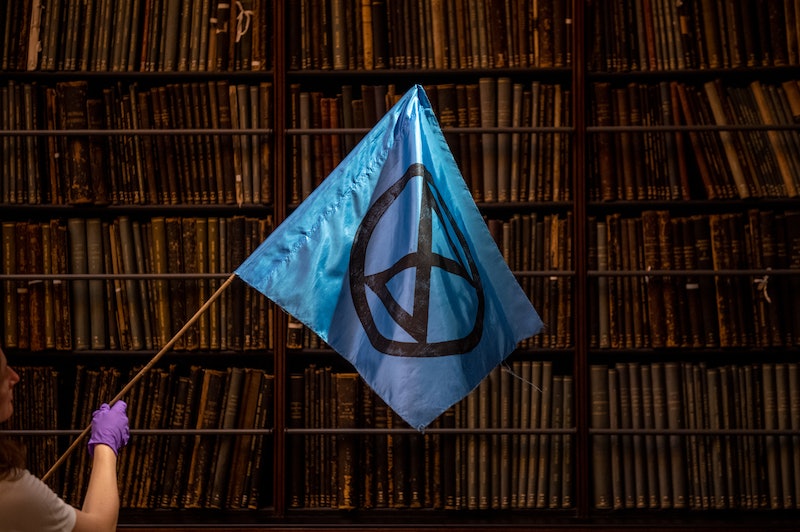 Picture the Victoria & Albert on West London’s museum-packed Exhibition Road, and you’ll probably imagine a gleaming trove of treasures salvaged from the past. Over 160 years old, this art and design institution houses collections that span thousands of years; from ancient Chinese ceramics to a painstakingly preserved collection of Mary Quant’s ‘60s mini-dresses. Within this shrine to the past however, a relatively new selection – the Rapid Response collection – is taking a completely different approach, and gathering objects of future historical importance from here and now.

Opened in 2014 and curated by Corinna Gardner, the V&A’s Rapid Response collection is on a mission to document world events and a quickly changing world as it unfolds in real-time. The growing selection contains modern day artefacts of all imaginable varieties: from menstrual cups and burkinis, to 3D-printed guns, and one of the umbrellas which featured as a symbol during the anti-government protests in Hong Kong.

“With the objects that we look at for rapid response collecting, it’s how they are made and their design, but also about a lot of bigger questions around contemporary society,” Gardner explains. The ongoing puzzle of how to weigh up a present object’s future historical value, the curator says, is the biggest question she faces each day. It’s a particularly tricky conundrum considering the sheer quantity of objects available. While Gardner’s colleagues over in 17th century British Material might find it near-impossible to source more everyday objects that help to give extra context to their exhibitions, rapid response has almost limitless possibilities. “Most of the things I want are accessible,” she agrees. “That’s not always the case, but it does mean that the selection process is a greater task.”

All of the objects in the Rapid Response collection are intriguing examples of modern design in their own right – but they also tell a larger story about how we live in the 21st century. A highly innovative carbon-fibre lift cable – which doubles the height capabilities of a lift – captures a brief snapshot of tightly-packed urbanisation and our cities growing upwards. A row of uncomfortable “architectural spikes” (deployed on streets to deter homeless people from seeking shelter) articulates various ideas about public space and the state of contemporary society. “So much of the work we do at the museum is about setting the imagination into flight to think about the world in different ways,” she says.

One of the division’s current projects is working closely with campaigners behind the climate protest group Extinction Rebellion. Gardner and her team’s aim is to preserve important pieces of protest design as the movement evolves.

As bushfires rage in Australia, and polar ice-caps melt at an alarming rate, the issue of climate change has captured the public’s imagination like never before, and Extinction Rebellion has emerged as one of the issue’s leading activist groups. Designed by a street artist, the group’s logo is bold and instantly recognisable – a bold black circle, containing the abbreviation ‘XR’. It’s a simple, effective piece of protest branding that harks back to Gerald Holtom’s peace sign, which became the symbol for the Campaign for Nuclear Disarmament in the late ‘50s.

“Last year it became clear that there was a movement around climate, and we could recognise it visually,” Gardner says of Extinction Rebellion, “whether it’s in the centre of London, rural Cornwall, or abroad. What was it that gave that uprising?” she asks. “Essentially it’s about collective identity.“

Working in the present day means that Gardner is able to meet with protesters and members of Extinction Rebellion’s design team to gain invaluable insights into their processes and motivations. “To meet with the XR arts group and to hear how they operate, how they conceived their activity; it’s really important for me as a museum curator working for the public that I can bring that access into the museum through objects,” she explains. “That’s knowledge that we hold, and then hold for the future – for when it becomes another part of history.”

Though XR is certainly not the first activist movement to galvanise around a strong visual identity – groups like the Suffragettes, who campaigned for women’s votes in the early 20th century had an unmistakable purple, green and white colour scheme – this latest group is “a protest movement of the digital age,” Gardner says. All of Extinction Rebellion’s logos and motifs are readily available online, open-source, and free to download and reuse. “The clever thing is that there’s an ability to create something for yourself within a set of tools,” she points out. “You feel that your personal narrative is within what you have made, but still feel it’s recognisable within the broader visual language of XR.”

In recent months, the Rapid Response collection has acquired XR protest flags, a plywood logo stamp, and an early edition of the group's declaration manifesto.

Rapid Response’s ultimate goal is to pass these objects – and their wealth of knowledge – on, ready for future visitors to the V&A to learn about in years to come.

The V&A’s rapid response collection features on BBC Arts’ ‘Secrets of the Museum’ available on BBC iPlayer now and the series continues on Thursdays, 8 p.m. on BBC Two