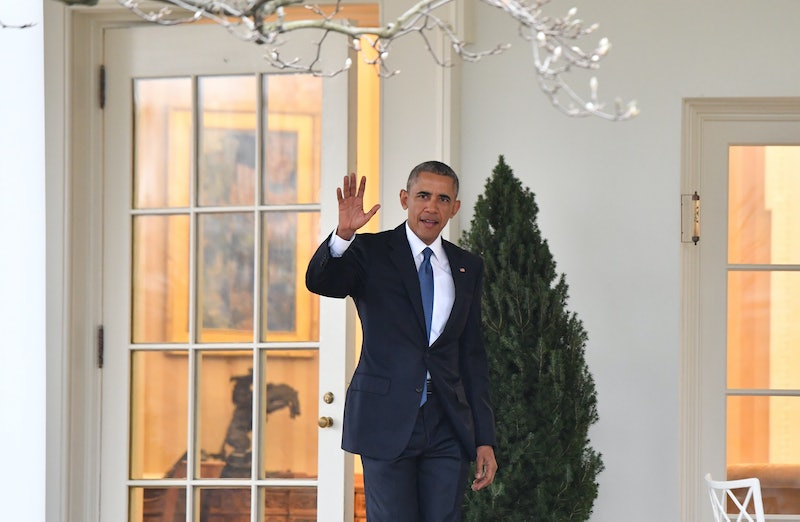 As many of us sit stunned and clinging to denial during the live updates of Donald Trump's Inauguration Day, there are still quick fleeting moments of sweetness, or really, bittersweet moments to savor while we move into the next presidential administration. The brief yet poignant video of Obama leaving the Oval Office for the last time as president feels like watching America's Dad step out for cigarettes, only to be replaced by our new stepdad Trump, who once called Washington leadership "losers" and "babies" during a October 2016 campaign rally in Fletcher, North Carolina.

This video feels like the last warm smile and wave from our father before he disappears to a bungalow to smoke pipes and catch up on the literature he only had time to skim as president. It feels cruel to be forced to watch Obama walk out and say goodbye to Uncle Joe Biden as he follows Obama out of the Oval Office, but these are the knocks. We have to say goodbye to Dad, well, in this capacity.

There's no doubt that Obama has much to do after his presidency; after all, he's only 55 years old. There's time for him to wear many different Dad hats now that he's not leader of the free world. In the meantime, grab some tissues or perhaps a thick absorbent sheet.

Obviously, the projection of fatherhood and sadness at seeing Obama leave isn't likely felt by optimistic Trump voters, who are eager to see the new stepdad take the reins.

However, considering the fact that Hillary Clinton received 2.5 million more votes than Trump, it's fair to say that the symbolism of Obama leaving the Oval Office feels like an emotional artifact for many of us. If you truly key into the video, you'll see that Obama even left a mysterious letter, which we can only hope professes his ongoing fatherly love and loyalty.

If you're feeling like a heaping mess after seeing physical proof that both our temporary father and uncle figures have left the Oval Office to make way for Trump, perhaps skimming over some of the best Biden and Obama memes will serve as a healing balm. Also, it's helpful to remember that while it may not feel this way right now, the Obama family is here to stay.

We'll miss you, President Obama (Dad!), but we are genuinely thankful for your service and compassion during your time in office. Hopefully, we can return the service as we dig in and support our communities during the upcoming administration.