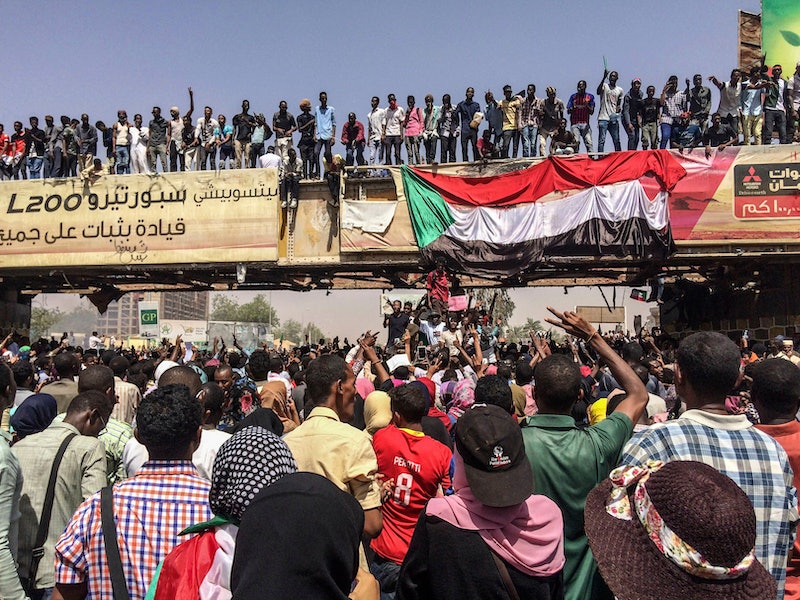 An iconic moment from the ongoing protests in Sudan is being talked about around the world. A viral photo of a Sudanese woman protesting is remarkable because of what it has come to signify. The image, which features a woman leading protesters as she stands atop a car, has become an emblem of hope, particularly because it evokes memories of historic Sudanese women activists.

As NPR reported, protests have been ongoing in Sudan since December 2018. According to the outlet, these protests began because people were frustrated with the high price of food and other essentials in the country. Eventually, the protests also evolved to demand the resignation of Sudanese President Omar al-Bashir, who has been in power for around 30 years, NPR noted.

On Monday, protesters again took to the streets, resuming the third day of a sit-in outside of Sudan's presidential compound and its military offices, CNN noted. During this event, a (not yet identified) woman dressed in white stood on top of a car and encouraged revolution against al-Bashir's regime, the outlet reported.

Many have commented that the photo of the woman is particularly emblematic because of the outfit she's wearing in it. Hind Makki, an interfaith educator in Chicago, explained the significance of the woman's outfit on Twitter — and emphasized that it offers revolutionary inspiration to Sudanese women and girls by paying homage to their activist mothers and grandmothers.

She's [the woman's] wearing a white tobe (outer garment) and gold moon earrings. The white tobe is worn by working women in offices and can be linked w/cotton (a major export of Sudan), so it represents women working as professionals in cities or in the agricultural sector in rural areas ... Her entire outfit is also a callback to the clothing worn by our mothers & grandmothers in the 60s, 70s, & 80s who dressed like this during while they marched the streets demonstrating against previous military dictatorships.

Hala Al-Karib, a Sudanese women’s rights activist who works for the Strategic Initiative for Women in the Horn of Africa, also emphasized to the Washington Post that the woman's white outer garment delivered a particularly striking message. “It’s a symbol of an identity of a working woman — a Sudanese woman that’s capable of doing anything but still appreciates her culture," she said to the paper. Al-Karib also commented that, for her, the photo epitomizes “this moment we have been waiting for for the past 30 years.”

Lana Haroun captured the photograph of the woman at the protest that has now gone viral, CNN noted. The outlet indicated that Haroun similarly praised the woman for offering inspiration to those in the crowd, especially women and girls. "She was trying to give everyone hope and positive energy and she did it," Haroun said to CNN. "She was representing all Sudanese women and girls and she inspired every woman and girl at the sit-in. She was telling the story of Sudanese women. ... She was perfect."

As the Washington Post described, having a woman's image become a symbol of the protests in Sudan is particularly fitting considering that women have been largely leading the activism in the country. As the paper noted, Sudanese women have increasingly had their rights limited under al-Bashir's regime — and, among other initiatives, are seeking to put a stop to gender-based discrimination.