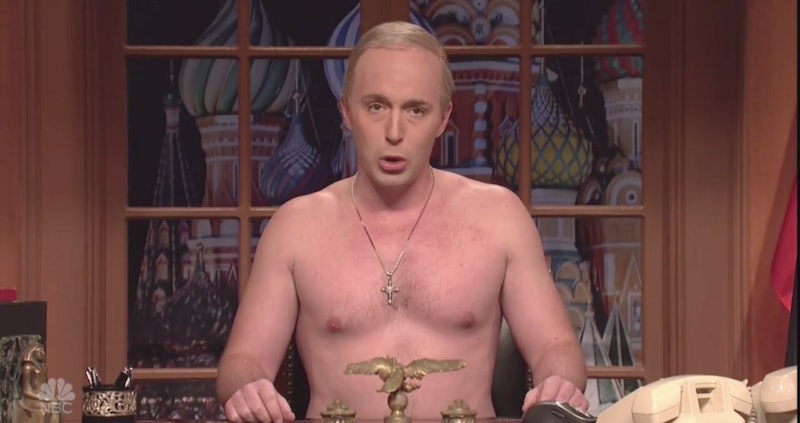 It's barely been a full day since Donald Trump's inauguration, but one of his closest allies is already getting annoyed with him, according to the satirical reporting of Saturday Night Live. The show's first post-inaugural episode wasted no time blasting Trump from the perspective of the Russian president, who has his own message for America. The Vladimir Putin SNL cold open mirrors how fed up you already are with Trump, and even if it's not representative of the two presidents' real relationship, it was a great way to critique Trump's first days in office.

Though Alec Baldwin didn't appear this week to reprise his already iconic Trump impersonation, the show utilized cast member Beck Bennett's Putin impression to incorporate plenty of Trump-related humor into the episode intro. Sitting shirtless (as he often is on SNL) behind a desk with the fake Moscow skyline in the background, Putin addressed the American people as the new de facto leader of the United States. "Today, many of you are scared and marching in the street. You are worried that your country is in the hands of this unpredictable man. But don't worry — it's not," Bennett as Putin said with a sinister grin.

But even though Putin is the one technically in charge, he still had qualms with the little things he left for Trump to take care of, like getting a crowd for the inauguration. Putin mocked Trump by showing video from Saturday's Women's March to show what a real crowd looked like, before cutting to footage of the significantly emptier National Mall on Friday during the swearing-in. He then also harshed on Trump for blatantly lying about the size of the crowds. "And today, you went to the CIA and said one million people came to see you in Washington D.C.! If you're going to lie, don't make it so obvious," Putin counseled his friend. "Say that you're friends with LeBron James, not that you are LeBron James. And I saw your speech too, it was a little bleak, no? And trust me, I know bleak — I wake up everyday and I'm in Russia."

Although there's no way to know if Trump and Putin are quite as chummy as they appear on SNL, the sketch was a hilarious way to look at exactly how much Trump's already bungled in the day and a half since he took office. Four years of this is going to be embarrassing to watch, but at least SNL is around to make fun of it all.