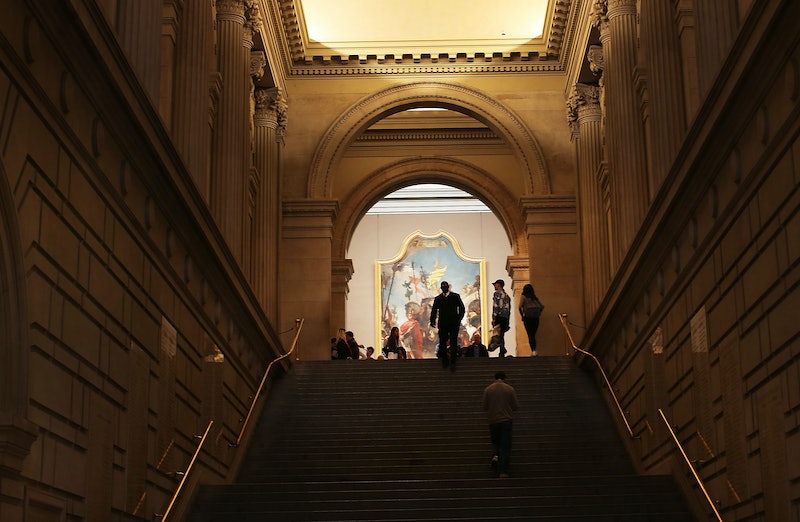 If you're a patron of the arts, you might already know all the Metropolitan Museum of Art in New York City has to offer. There, you can walk through an Ancient Egyptian temple, take in the work of Vincent van Gogh and Picasso, and, if you're feeling adventurous, go uptown and see the Cloisters, but did you also know that now you can take a wizarding tour of the Met? Get your wands ready, witches, because this is an artful outing like you've never seen.

Hosted by Secret NYC and Fever, Griffins, Goblets and Gold is a Harry Potter-inspired guided tour of the Metropolitan Museum of Art that invites muggles to find magic in the extensive art collections and breathtaking architecture. It offers visitors, both first-timers and regulars who have seen it all before, a new frame of reference for exploring the museum's many "places and spaces reminiscent of the ones in the Harry Potter books," according to the event description. I don't know about you, but that sounds like the perfect way to spend an afternoon post brunch. Book club field trip anyone?

While the the Griffins, Goblets and Gold tour might not actually lead visitors to moving staircases, hidden rooms, and talking pictures, it will show fans marvelous real-life items and enchanting locations inside the Met's many wondrous exhibits. All Potterheads have to do is head to Museum Mile to feel like they've stepped through the Floo Network and straight into Hogwarts.

According the the website, tour highlights include parts of an actual castle not unlike the home of the famed wizarding school, art objects and artifacts associated with "dark magic," and other awe-inspiring objects that look like something you'd find in Dumbledore's office or the shop windows of Diagon Alley. Although you may see items that resemble Salazar Slytherin's locket, Rowena Ravenclaw's diadem, and Helga Hufflepuff's ring. One piece of advice, though: even if it looks like a Horcrux, do not under any circumstance try to destroy it, or the museum staff will be on you faster than a niffler on the Hope Diamond.

This tour isn't the first time the Met has been at the center of bookish wonder. The museum served as a refuge and a playground for Claudia and Jamie in From the Mixed-Up Files of Mrs. Basil E. Frankweiler. It is one of the many stops Holden Caulfield makes on his journey through New York in The Catcher in the Rye. It was the site of the bombing in Donna Tartt's The Goldfinch. It was even where Serena, Blair, and the minions ate lunch in the Gossip Girl series. The Met has appeared in dozens of books, and inspired even more. Although the Harry Potter series isn't *technically* one of them, don't get your wand in a knot: there are plenty of similarities between the contents of the Met and the wizarding world to keep Potterheads entertained on this unique guided tour.

Griffins, Goblets and Gold: A Wizarding Tour of the MET launched Nov. 29, just in time for the holidays and arguably every Potterheads' favorite time of year. It costs $45 per no-maj, which includes admission to the museum, and muggle children under three can attend for free. The tour runs once a day until Dec. 29 on select days the MET is open, but if you're interested in attending, you're going to want to reserve your spot ASAP. It is a small and intimate tour with only a limited number of tickets available, and they are going faster that hot butterbeer on a winter's day. Several sessions are already sold out, but if you have Felix Felicis on your side, you just might be able to see the MET through a wizard's eyes.

More like this
Alan Rickman's Diary Reveals Why He Considered Leaving 'Harry Potter'
By Darshita Goyal
This Episode 6 Moment Foreshadows Viserys' Fate On 'House Of The Dragon'
By Grace Wehniainen
Nicola Coughlan Shared A Lady Whistledown Excerpt From ‘Bridgerton’ Season 3
By Grace Wehniainen, Alyssa Lapid and Sam Ramsden
You Can Stay At The 'Hocus Pocus' House On Airbnb
By Alexis Morillo
Get Even More From Bustle — Sign Up For The Newsletter