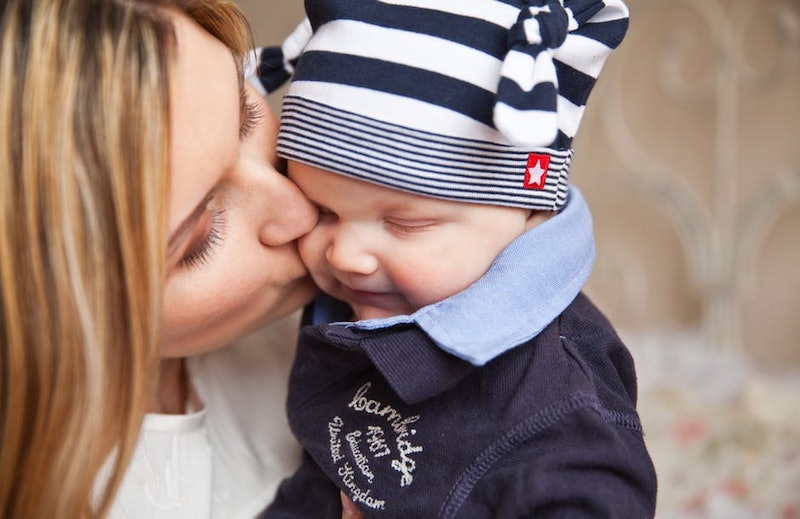 Women are superheroes — they can do it all: take care of the family, bring home a paycheck, and even breastfeed while using crowded public transportation. Still, the latter of the three doesn't warrant much attention, or even a place to sit, which is what happened when nobody offered their seat to a breastfeeding mom on the train. She shared the story in a Facebook post that has since gone viral, garnering nearly 8,000 likes and almost 30,000 shares at the time of this article.

Bryony Esther boarded a busy UK train and needed to breastfeed her 15-month-old. Is it the easiest place to breastfeed? Of course not; but when the kid’s hungry, the kid’s hungry. One might think seeing Esther’s situation would encourage someone to give up their seat so she could have it; but one would be wrong in thinking so. Esther continued to stand while holding her child; and the situation was so darn unbelievable that she took a picture of it to share on Facebook.

"Having to stand on a train whilst breastfeeding my baby thanks to the lovely bunch of charmers giving more priority to their suitcases and rolling joints!!" Esther writes in the post.

"It stinks. Plus the cyclist with a fancy bike that keeps rolling into me, sat in the disabled seat. Please share cos I'd love it if their mothers, girlfriends and wives get to see how they behave."

In the comments, Esther posted an additional video showing a group of men standing nearby, explaining in a separate comment, "Hell no they 1000% knew. The fact I stood by them for a few mins and then asked if I could please sit where the suitcase was and yet they ignored me completely. The suitcase was being used as a surface to roll their joints. Then they stared at me for ages!! Disgusting excuses for human beings."

Her words clearly resonated with Facebookers around the world, and comments poured in with words of support. Not everyone was on board, though. Some people argued that it was her responsibility to continue asking for a seat, even though she tried once and was rejected.

Yet another comment points out, "Still managed to take a picture tho!!!" A different man said, "It does suck that people won't give up seats... however, you are standing in the place on the train where people are supposed to put bikes. A place where there are only 3 seats that whole end."

However, someone else pointed out that this is also the place for people with "buggies," which included Esther. Also? There wasn't room anywhere else.

Breastfeeding in public continues to be a hot topic, as not everyone is as accepting of it as they could be. Instead of acknowledging it as an instinctual process of feeding that women's bodies are equipped to do, it's not out of the ordinary for passersby to label it gross, unnatural, or even sexual.

Esther certainly isn't the only woman who has been shamed for breastfeeding in public, and she likely won't be the last. Conner Kendall was breastfeeding her child at a TGI Fridays in Terre Haute, Indiana, when a man took her picture and posted it to Facebook and Instagram, saying, "OK moms out there.. I know when a baby is Hungry they need fed. I went to know if this is appropriate or inappropriate as I'm trying to eat my Fridays, there are little kids around.. I understand feeding in public but could you at least cover your boob up?! Your input is needed!" In another situation, a mother was asked to cover up while breastfeeding on an American Airlines flight. These scenarios hardly mark the tip of the iceberg.

These experiences range from slightly annoying to threatening and scary, evidenced by the woman who was verbally attacked for breastfeeding by a man at Target, who kept telling her she was disgusting and a whore.

Every time women like Bryony Esther and the others mentioned here speak up, it sheds a little more light on the stigmas and stereotypes surrounding breastfeeding and helps to normalize it more, even if just a little bit. Hopefully people will continue to be more mindful of breastfeeding mothers in public. It's nature, people.