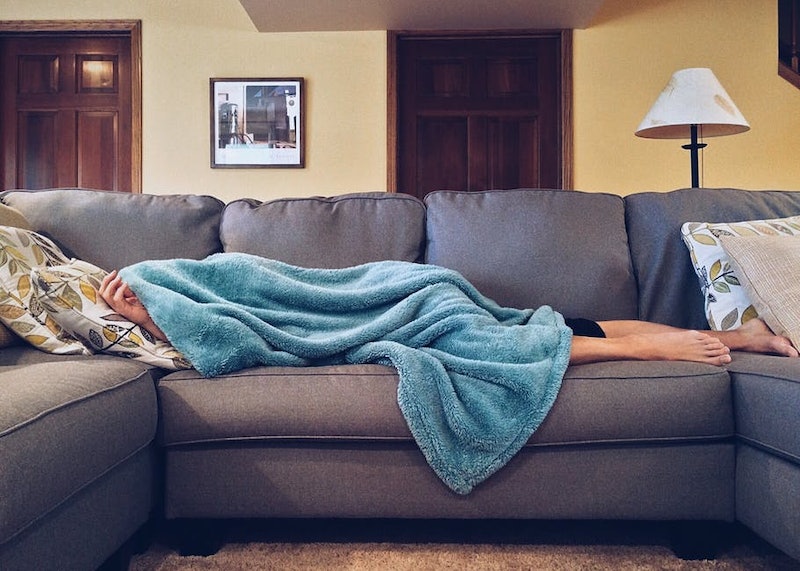 If you feel like you constantly need more sleep, then ladies science is on your side. In fact, there's now scientific backing for the idea that you should be able to have a little work time nap between meetings. That's right, women should be able to nap at work— science says so.

What mysterious and miraculous science is this? Well, first off, let's look at how amazing naps are. One study from the University of California looked at how we performed at different tasks throughout the day— and found that naps were pretty damn powerful.

“Naps had the same magnitude of benefits as full nights of sleep if they had a specific quality of nap,” Sara Mednick, a co-author of the study and associate professor of psychology at the University of California, Riverside told the New York Times. The same benefits as full nights of sleep. So they're not joking— naps can really make a difference and you can see why napping areas are gaining momentum in the workplace.

But why women specifically? Well, Rebecca Gale over at Cosmopolitan broke down exactly why women especially deserve some nap time— because the truth is, both our bodies and our schedules demand it.

Physically, it's just a truth. Professor Jim Horne, director of the Sleep Research Centre at Loughborough University and author of Sleepfaring: A Journey Through The Science Of Sleep, has explained that sleep is a time where our brain gets to repair and heal itself. But women actually need more of it than men— because we're naturally more prone to multitasking. He estimates that women need on average 20 more minutes sleep, but that will vary from person to person.

And Our Schedules Are More Hectic

Women have a tendency to sacrifice their sleep and leisure time — and no, that's not a woe is me, that's science. Sociologist Suzanne Bianchi looked at the American Time Use Survey. And what she found was that women, and especially workig mothers, give up sleep time:

"Do employed mothers get less sleep? The answer is yes. Because time is finite, they also have much less free time,including less of the most relaxing of free time—what might be called “pure” free time that is not spent in charge of children or combined with some unpaid domestic activity like folding laundry. Feelings of 'time pressure' may also be heightened when long work hours curtail time for rest and relaxation."

And let's not forget the mental emotional labour on top of that. Brigid Schulte, author of "Overworked: Work, Love and Play when No One Has the Time, emphasized how the mental effort of multitasking and emotional labour of making sure everyone is happy and attended to is really effing tiring. Which you'll know if you've been a woman at... well, anything. I leave family events feeling like a damn puddle.

With all of this energy and multitasking, imagine how much our brains suffer with a lack of sleep. So next time you're feeling groggy, find a quiet place for a kip. You'll come back more refreshed and more productive — just tell your boss that science said so.