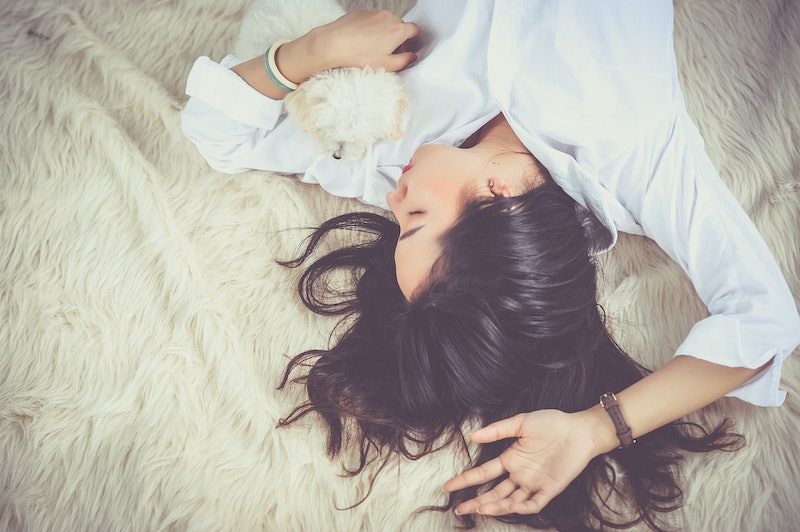 Endometriosis affects one in ten women in the United States, but like many menstrual health issues, it's not discussed very often. Maybe that's why one woman's Instagram post about living with endometriosis is going viral. Her photographs educate people who don't have the disorder, and those who do can commiserate with the painful condition.

According to the Endometriosis Foundation of America, endometriosis affects about 176 million women worldwide. The condition occurs when the endometrium, the tissue that normally lines a woman's uterus, spreads to other organs and continues to follow the menstrual cycle. This means the endometrium outside the uterus still thickens and breaks down every month, but it has no way to exit the body. As the Mayo Clinic explains, "Surrounding tissue can become irritated, eventually developing scar tissue and adhesions."

Thessy Kouzoukas, the creative director and co-owner of a clothing line, is one of the millions of women living with endometriosis. In mid-July, she took to Instagram to educate her followers about what it means to have the condition. She posted two side-by-side photographs, each showing a different aspect of endometriosis. The first shows her stomach three weeks after an ovarian cyst ruptured. The second was taken a few weeks later, after starting a hormone-blocking drug she said "sent [her] into menopause at the age of 27."

"This is me. This is endometriosis," Kouzoukas wrote in the caption, adding that she didn't intend to share the photos. She decided to post them, though, after hearing from other women when she spoke out about endometriosis previously.

She then explained that she will be undergoing surgery in August, which she expects to keep her hospitalized for a week. "Endo is no joke. ... If you know anyone with bad period pain PLEASE tell them to get checked for this," she wrote.

Symptoms of endometriosis include incredibly painful periods, a heavy flow, fertility issues, and pain during or after sex. As the Mayo Clinic points out, it can take a while to receive a proper diagnosis, not least because the condition is often mistaken for other disorders like pelvic inflammatory disease and irritable bowel syndrome. Doctors have yet to identify a cause; possibilities range from "retrograde menstruation" to an immune disorder.

Kouzokas' Instagram post drew enough attention that she wrote an article about endometriosis for the Huffington Post. In the essay, she opens up about her struggle for her menstrual pain to be taken seriously — a problem familiar to many women. It was ten years before she discovered that her excruciating cramps were the symptom of endometriosis.

"You're told... that you might experience period pain — but we aren't told how much pain should be considered tolerable, or when too much pain could be an indication of something worse," she wrote.

It's no secret that the medical community treats women's pain less seriously than men's. Research has shown that women wait longer for pain medicine in emergency rooms, and doctors often give credence to the myth that women have a naturally higher pain tolerance. Combined with the stigma surrounding menstruation today, it's no wonder so many women, including Kouzoukas, endure years of intense pain before being diagnosed with endometriosis.

As more women share their stories about endometriosis, though, awareness of the condition is spreading. The first step to staying healthy is staying informed, and endometriosis is common enough to be on every woman's radar.

More like this
Black Women's Equal Pay Day Highlights An Upsetting Problem
By Brandi Neal
Megan Rapinoe's Relaxation Hack Is Super Dreamy
By Carolyn Steber
This Psychological Effect Might Be Keeping You From Hitting Your Goals
By Lexi Inks
The 5 Best SLS-Free Toothpastes, According To Dentists
By Amy Biggart and Danielle Calma
Get Even More From Bustle — Sign Up For The Newsletter