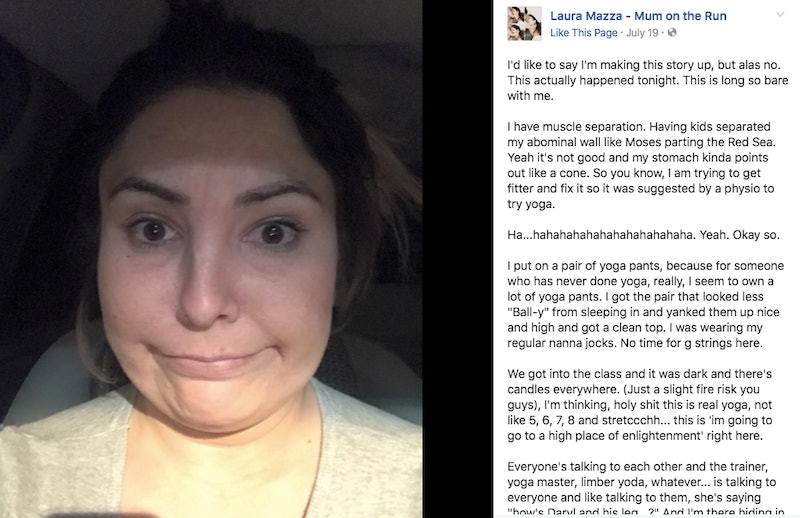 Laura Mazza - Mum On The Run/Facebook

OK, admit it — you've farted in an inappropriate place before. Maybe it was at the grocery store. Maybe it was in the car with friend that you hoped wouldn't notice. Or maybe it was during a time where you were getting intimate with someone. Either way, it happens to all us. It's just that blogger Laura Mazza to actually had the ovaries to share her embarrassing yoga class fart story. And the story is nothing short of hilarious and mortifying, but you just can't stop reading.

The story is embarrassing because she was in public, but also because women aren't supposed to fart, right? A question that I think even some feminists wrestle with or joke about, especially when dating. Like, should your partner know that you have all the same bodily functions? And when is it appropriate to share that with them? This is why Mazza's story is kind of ... freeing. She shares what most of us experience, but are too darn embarrassed to talk about — especially in a way that thousands of people can comment, like, or share. At least behind the safety of your phone and computer, you say, "Oh, my god. I've done that too."

Originally posted on Facebook, featuring a goofy photo of Mazza, she shares the story of how she let a few rip at her first yoga class. What makes this especially cringe-worthy is the fact that it also happened with a yoga instructor trying to assist her. And in pure human fashion, it became a matter of fight or flight. Mazza opted for flight, deserting her mat on the ground and the yogi endeavor altogether.

The funniest part about Mazza's yoga excursion was that it was a train wreck waiting to happen. As a mother, Mazza shared that she had abdominal wall separation after having kids and intended to get in a little more exercise. Plot twist: she's also experiencing symptoms of irritable bowel syndrome. So when the yoga actually started working, her fitness journey took a sharp left.

It also doesn't help that somehow she got the spotlight as a newcomer to the yoga tribe. After awkwardly sharing a few details about herself with the yoga instructor, she got into it ... and it happened. I applaud her for staying for the next position, but it's exactly where we go over the embarrassing cliff with her. P.S. — Mazza also describes her farts as the following: "My farts stink like something mixed between a rotten egg and an incineration plant." So after we live down the first incident, the second is unbearable.

The interesting thing about this is that even though it is wildly embarrassing, it isn't far from a real truth. Women fart in yoga, a lot. While I'm not encouraging you to take up yoga when you're feeling real gassy, it happens. It happens. Like Mazza, you just have to live your life (and hopefully do what she did afterwards, which was to promptly drive to the nearest McDonald's).

More like this
On TikTok, Tinned Fish Date Night Is The Latest Viral Food Obsession
By Emma Carey
TikTok's Butter Board Might Be The New Cheese Plate
By Emma Carey
8 Completely Unserious Tips To Make Your Cuffing Season A Success
By Ginny Hogan
Why TikTok Is Flooded With Controversial Videos About "Pick Me Girls"
By Courtney Young
Get Even More From Bustle — Sign Up For The Newsletter