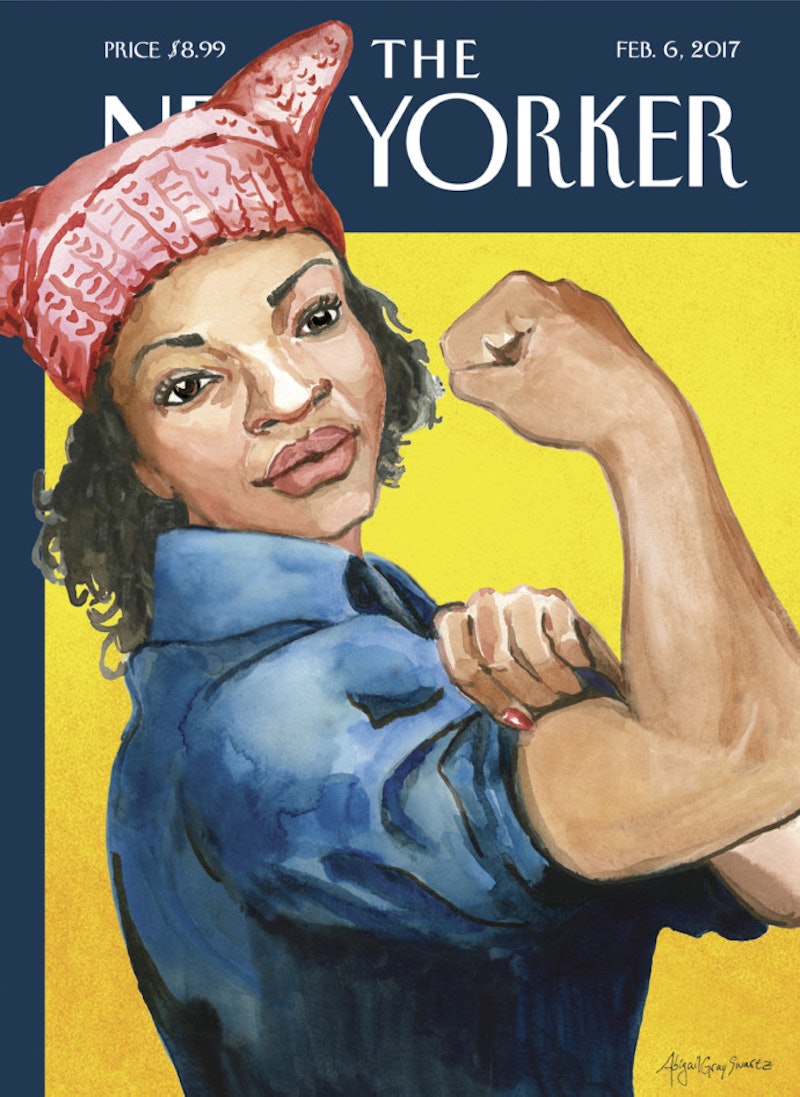 The country is still processing the impact of the nationwide Women's March last weekend and what it means for the future, but one news outlet hit the nail on the head already. The New Yorker's latest issue showcases an updated version of the classic Rosie the Riveter picture, now featuring a black woman adorned with a pink pussy hat. The drawing perfectly captures why the march took place, because it wasn't just about all women, it specifically advocated for the most vulnerable in society with an intersectional perspective.

Giving Rosie the Riveter a race swap, and thereby elevating the status of women of color within the women's rights movement, is a perfect symbol of the march. It's not that there aren't plenty of white women who have stakes in the fight that the Women's March represented, but a woman of color as the new symbol of women's equality is just so much more apt. WoC get the brunt of most social issues affecting women, like abortion, pay gap, and intimate partner violence, making them inherently racial issues that need to be looked at through an intersectional lens. A white woman as the face of those issues isn't an accurate representation of America anymore, and this symbol that makes WoC synonymous with leadership through this time in history is one of the best ways possible to make sure they are continuously included in feminist advancements.

The iconic Rosie the Riveter image has been portrayed in various contexts over the decades, but frequently still with a white woman as the central figure. As the proportion of white women in the United States lowers and the country approaches a "majority minority" demographic, society is in desperate need of this reimagining of its symbolism. Images like this humanize and sympathize the struggles of women of color, who are far too often left out of the conversations that could most benefit from their voices. Without women of color, the march would have been so much less powerful and less truthful. This drawing is just one small way to thank them for all they have given to American feminism, largely without complaint or recognition, and see that all women can move forward from here together.

Without women of color being represented and heard, women can never achieve true equality in this country. This single image gives them the power to do both a little easier. Rosie the Riveter transformed the way American women were seen and saw themselves, and nearly 80 years later, she's going to do it again.