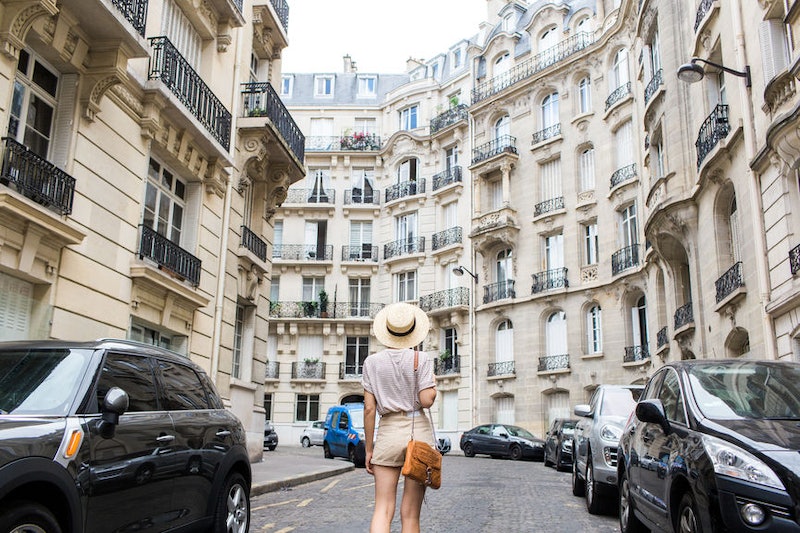 I've written about my travel anxiety before, but it's still something I consider one of the biggest obstacles in my life. I wasn't always nervous to travel. But a sudden onslaught of general anxiousness paired with a total lack of long-haul travel experience (29 years, four plane rides total, all to Orlando) have built up a bit of a wall when it comes to exploring parts unknown. If you're like me and you haven't traveled much for whatever reason — financial, physical, or some combination of the two — you might have some mental blocks surrounding travel, too. Of course, there are professional methods of mind retraining that are helping me overcome my anxiety, but one of the best ways I've found to help me get more comfortable with travel is actually through reading. And the most helpful book by far has been Anna and the French Kiss by Stephanie Perkins.

It might sound strange that a YA rom-com would be the thing to help me become more comfortable with vacationing abroad, but I didn't pick up this book with any expectations of reducing travel anxiety. In fact, I had already read and re-read Anna a number of times before I started working through this particular fear. The novel follows Anna Oliphant who has been shipped off to a Parisian boarding school by her parents in her senior year of high school. Not exactly something to complain about, she knows, but she is miserable at the thought of leaving her little brother, her best friend, and her crush behind to live in a foreign country all by herself. And her fear of Paris is evident right away. Even after Anna is welcomed into a large friend group (including the dreamy Etienne St. Clair) it takes her weeks before she is able to even venture outside of the school grounds and into the city.

Anna is afraid she isn't dressed correctly, she worries that people will judge her, and she panics at the thought of not being able to communicate in French. Though it's never stated as such, it definitely seems like Anna has some travel anxiety of her own. And while Anna and I don't share all of the same worries — I'm not particularly worried about my wardrobe being accepted in Europe, and Anna doesn't seem to mind traveling by plane the way I do — I relate so much to her general discomfort with the unknown. Because that's what a lot of anxiety really is after all: a series of scary what-ifs that are 99.9 percent likely to never even happen. That's the most frustrating part about it all, really, but it's also the part that makes it seem surmountable. If you can get past the irrational what-ifs, you can live the life you truly want to live, right?

Anna and the French Kiss by Stephanie Perkins, $8.79, Amazon

That's what Anna discovers throughout her year in Paris. Taking just one small step outside of the school's campus introduces her to a city filled with movie theaters and delicious restaurants, beautiful architecture, and unlimited adventures. The way that Perkins writes Paris — so vibrantly that it feels like the city is just another beloved character I was getting to know — adds another layer to becoming familiar with the exciting aspects of spending time abroad. Even when things aren't perfect. Even when you're a little (or a lot) scared and totally unsure.

Picturing myself making a wish at Point zéro des routes de France, browsing the stacks at Shakespeare & Co., choosing a colorful macaron from a bakery display case...it feels almost familiar and even comforting. After all, I've lived it all before, with Anna and Etienne and their friends. We all know that novels have the power to transport us to new places and far-off worlds, to make us feel as if Hogwarts and Middle Earth — or London and Paris — are just as close to us as our own living rooms. And if I think of it that way, taking the leap to get there IRL isn't really any scarier than losing myself in a beloved book. Sure, it might take me a little bit more time to get there, but I know that books will have been a huge part of what helped me arrive — and when I do, it will be like finally visiting an old friend.

More like this
Read The First Pages Of Emma Rosenblum’s Highly Anticipated Debut, 'Bad Summer People'
By Samantha Leach
What Joyce Carol Oates Knows About Fame
By Erin Somers
10 Must-Read New Books Out This Week
By K.W. Colyard
Viserys’ Fate On 'House Of The Dragon' Could Differ From The Book In This Surprising Way
By Grace Wehniainen
Get Even More From Bustle — Sign Up For The Newsletter