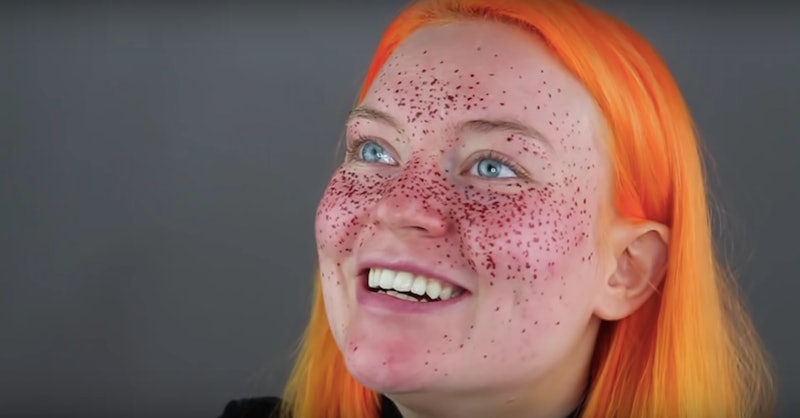 Sometimes, recreating looks you see on YouTube isn't a great idea, and this YouTuber's henna semi-permanent freckle fail is proof of that. YouTuber Naomi Jon posted a video to her YouTube channel explaining that she wanted to give herself faux (but permanent) freckles after seeing a woman on Instagram do the same. As it turns out, it may not have been such a great idea.

In the video, Jon explains that a few months ago, she saw a woman on Instagram use henna to give herself permanent freckles. Jon even inserts the Instagram video into her own, and honestly, the results are kind of amazing. Then, Jon actually met the woman from the inspiration video and after getting advice on what to use and how to create the freckles, she decided to take the plunge.

She was advised to buy henna in an orange brown shade to make the freckles look more natural. After opening the bottle of henna and proclaiming that she won't be a "chicken finger" about creating her own freckles, Jon goes to town applying faux freckles over her nose and cheeks and even extends them up into her brow bone and forehead. Let's just say that there were a lot of freckles.

Through the application, Jon admits to the henna burning a bit and says that she's never actually used it before. Soon, her skin begins to turn red underneath the dye.

After finishing her application, it was time to wash away the dye, and the result was, well, not what she wanted to say the least.

Jon's face is ultra-red and so are her faux freckles. Remember when Kim Kardashian got that vampire facial? That's kind of what this looks like.

In fact, it's so bad that she explains she'll have to take off work.

In quick thinking, Jon ponders whether or not foundation would help the situation. After all, high coverage foundations can do some serious cover-up work including concealing things like tattoos.

Unfortunately, despite using full coverage heavy hitters like Tarte's Shape Tape and Dermacol foundation, Jon had no luck in concealing the henna freckles. While not nearly as red, they're certainly still visible.

Jon then begins to google remedies for removing henna including suggestions such as using salt and olive oil, lemon juice, and toothpaste. Basically, all of the options seemed like if they got rid of the henna, they'd probably destroy the state of her skin.

Ultimately, Jon does have a great sense of humor about the fail. While she does darkly admit that she's probably going to cry after the video ends, she admits that the henna was probably the wrong kind and laughs her way through the video. Kudos to her for even posting it instead of dissolving into a puddle on the floor.

If you're thinking of recreating the look, maybe just head to faux freckle kind James Charles' tips and tricks. Permanent dye on your face may not be the way to go for this look.