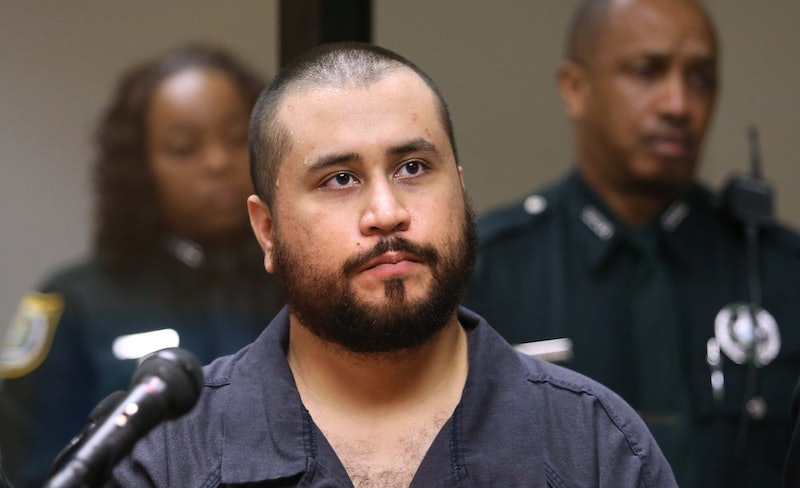 According to the New York Post, George Zimmerman got kicked off Tinder for creating a fake profile. It's at least the third time that Zimmerman, who fatally shot 17-year-old Trayvon Martin in 2012, has been booted from a dating site, the Post reports.

"At Tinder, we take our users' safety very seriously and our team has removed this profile from our platform," a Tinder spokesperson confirmed to Bustle in a statement. The spokesperson continued, via email:

We utilize a network of industry-leading automated and manual moderation and review tools, systems and processes - and spend millions of dollars annually - to prevent, monitor and remove bad actors who have violated our Community Guidelines and Terms of Use from our app. These tools include, automatic scans of profiles for red-flag language and images, manual reviews of suspicious profiles, activity, and user generated reports, as well as blocking email addresses, phone numbers and other identifiers.

According to screenshots obtained by the website Creative Loafing, Zimmerman created a Tinder account in which he identified himself as "Carter" and posted photos depicting himself in a graduation gown, posing with a dog, and shirtless.

"I'm looking for carefree, fun," Zimmerman, as "Carter," wrote in his profile. "I love the outdoors, fishing camping and hiking. I love adventure not into huge crowds. I'm also down for a quiet night with longhorn takeout."

Tinder's Community Guidelines prohibit "impersonation," and warn users not to "pretend to be someone else."

Zimmerman fatally shot 17-year-old Martin in 2012, ostensibly while acting as a neighborhood watchman, and was acquitted the next year after claiming self-defense. He's had many legal problems since then, beginning shortly after his acquittal.

Zimmerman was detained by police in September 2013 after allegedly pointing a gun at his his estranged wife and her father, but wasn't charged. Through his lawyer, Zimmerman denied pointing a gun at either of them, though he acknowledged that there "may have been some pushing." In 2015, Zimmerman was arrested again, this time for allegedly throwing a wine bottle at his new girlfriend. According to the police report, Zimmerman denied throwing the wine bottle; his girlfriend eventually retracted her story, the Orlando Sentinel reported, and no formal charges were filed.

Zimmerman has had various other legal troubles since 2013 as well, and drew strong criticism in 2016 for auctioning the gun he used to fatally shoot Martin.

"Prospective bidders, I am honored and humbled to announce the sale of an American Firearm Icon," Zimmerman wrote on the auction page. "The firearm for sale is the firearm that was used to defend my life and end the brutal attack from Trayvon Martin on 2/26/2012."

Zimmerman has also had problems staying on dating apps. Prior to the Tinder incident, Zimmerman was booted from Bumble twice between December 2018 and February 2019, a spokesperson for the company confirmed to the Post.

“George Zimmerman was blocked and banned in December 2018 when we first discovered his profile,” the spokesperson told the Post. “We have blocked and banned him again after we were informed by our users that he had created a new unverified profile.”

According to screenshots obtained by Orlando Weekly, Zimmerman used several of the same photos on Bumble as he did on Tinder — though he wrote different bios for each app.

"Let’s get coffee and cake pops," Zimmerman wrote on Bumble, according to Orlando Weekly. "I’m looking for a mature and fun woman that’s ready to be loved and respected the way she deserves and is able to reciprocate."

More like this
Chris Kaba's Family Continue Fight For Justice After Viewing Police Bodycam Footage
By Sophie McEvoy
These 2 Women Could Be America’s First Lesbian Governors
By Tess Garcia
These 25 Female Governor Candidates Won Primaries & Could Make History
By Tess Garcia
Who Is Nick Cannon Dating & How Many Kids Does He Have?
By Jordyn Tilchen and Radhika Menon
Get Even More From Bustle — Sign Up For The Newsletter