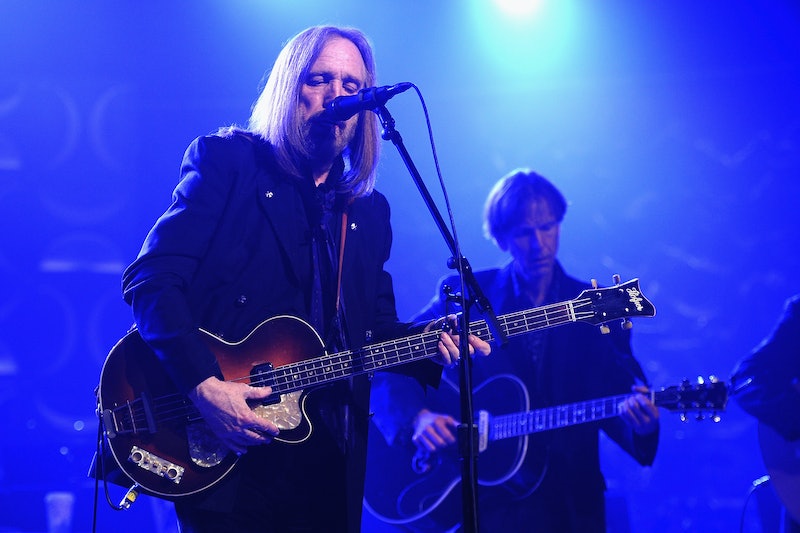 Early Tuesday morning, Tom Petty died at 66, according to a statement from his manager. The singer had experienced a cardiac arrest on Sunday night and was unfortunately unable to recover after the incident. Sadly, Petty's final tweet was posted in the midst of this tragedy, though the fact that it ties back to the musician's career might provide a bit of comfort to fans who are still reeling from the loss.

The last tweet from his official Twitter account was a part of a celebration of the 40th anniversary tour of Tom Petty and The Heartbreakers, Petty's famous band. In the picture, which was taken by Robert Sebree in 1996, Petty can be seen at the keyboard as the "She's The One" director, Ed Burns, looks on. The tweet includes the hashtag, #TPHB40, which was used to mark the celebration on social media. It was the 100th out of the 365 photos/tweets that were going to be shared in celebration of Tom Petty and The Heartbreakers. The tweet was liked and retweeted an incredible number of times and also had fans flocking to the comments to pay their respects to the singer.

The image now stands as the last one that shared on Petty's social media account, likely by a member of his team as the singer was reportedly in the hospital when this tweet was posted.

Tom Petty and The Heartbreakers were featured on the soundtrack for Burns' movie, She's the One. Petty largely wrote most of the songs for the film's soundtrack including "California," "Angel Dream," and "Grew Up" Fast. The film, which came out in 1996, featured Cameron Diaz and Jennifer Aniston — before their mega stardom days. It film also featured Burns, who wrote and directed the film.

But there were many other tweets from Petty's account that celebrated the life of the singer and Tom Petty and The Heartbreakers music.

The 97th snap included this awesome ad for the first appearance that Tom Petty and The Heartbreakers had at the Hollywood Bowl. The band first appeared at the famous stadium in 1995.

The 94th pic in the series shows the band while they were on their Strange Behavior Tour and was taken in 1989. It's an old-school image of Petty, but an amazing one nonetheless.

In the 75th snap of the series, Stevie Nicks joined Tom Petty and The Heartbreakers for a show in 1981 just as "Stop Draggin' My Heart Around" was released.

The 50th photo shared for the #TPHB40 celebration features Petty and the band around when they first started. The snap shows the band hanging out "Circa late 1970s" and features some classic '70s looks.

"Let Me Up" Release

The 39th snap shows the band in an ad focused around their seventh studio album, Let Me Up, released in 1987. The pic shows Petty front and center in a beautiful shade of purple.

"Runnin' Down A Dream" Premiere

This photo (the 35th in the series) gets a little more recent with the band. They can be seen here attending the Runnin' Down A Dream movie premiere with the director of the film, Peter Bogdanovich, in 2007.

In one of the earliest snaps in the series, Petty can be seen rocking out alongside his band as the crew performed at the Super Bowl in 2008. Their performance will go down in history as one of the best.

It's nice to see so many awesome moments of Petty's career through this series. If these memories are any indication, he may be gone but he'll never be forgotten.