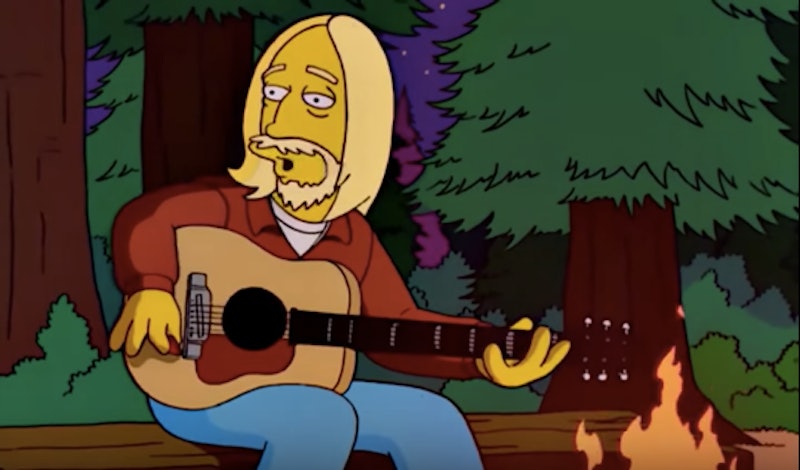 It's a somber day for music fans, following news that Tom Petty died after going into cardiac arrest, his manager confirmed to BuzzFeed News late Monday night. The 66-year-old music legend not only created countless songs throughout his career, but made other memorable appearances, including Petty's The Simpsons cameo. If you're looking for a way to smile through the tears, this may be exactly it.

According to IMDb, Petty appeared in "How I Spent My Strummer Vacation," a Season 14 episode that aired nearly 15 years ago in November 2002. The Grammy winner was joined by other big-name artists, including Elvis Costello, Mick Jagger, and Lenny Kravitz. Per the synopsis on IMDb, "When Marge, Lisa and Bart find out how hard Homer struggles to keep a roof over their heads, they enroll him in a Rock & Roll fantasy camp to relax at for a week."

The scene with Petty, below, is easily one of the most memorable moments. In the music-filled episode, Tom Petty and the Heartbreakers frontman leads a lyrics workshop, where Homer and the other attendees, such as Apu and Chief Wiggums, complain about the lyrics being boring. "You just want mindless generic rock?" Petty asks, before flipping his acoustic guitar into an electric one.

Petty's campfire lyrics juxtapose the party elements of rock 'n' roll with the need to improve the school system. He sings,

"See that drunk girl speeding down the street?

She's worried about the state of public schools

She prays that our schools don't run out of chalk"

Homer and his pals cheer and boo accordingly, of course. Yet the simple moment also shows the heart within Petty's career, which shouldn't be overlooked either. (After all, he was honored as the 2017 Grammy MusiCares Person of the Year back in February; not just for his impact on the industry, but also his philanthropy.)

According to an Entertainment interview with The Simpsons producer, Mike Scully, Petty was at the top of the list of musicians he wanted in the 2002 episode. Scully told EW,

"One of the things that always drew me to Tom Petty — beyond the amazing songwriting and musicianship of him and the band — was that he had this great dry sense of humor, which is why people in comedy really liked him too... When he did The Simpsons, I knew we wouldn’t have to tell him how to be funny; he would just come in and do it."

If humor isn't the first thing that comes to mind when you think of Petty, it's understandable, given how much attention he received for his music. But as Scully points out, his dry humor is great, and you can see for yourself in the Simpsons clip.

Fans on Twitter even reminisced about the magical TV moment, with one dubbing it one of the best Simpsons episodes ever — and considering just how many episodes there are, that says quite a lot.

Eric Keyes, a character designer for The Simpsons, also tweeted about working on this very episode. "Here's a little laughter to ease the heartache," he wrote.

Sure, Petty did so much more than just appear as a Simpsons cartoon. He was inducted into the Rock and Roll Hall of Fame in 2002, along with Tom Petty and the Heartbreakers. He also recently completed a 40th anniversary tour with his band. Oh, and he also earned three Grammys in his career. FYI, that's just the short list.

Yet celebrating this Simpsons cameo doesn't take away from any of those other accomplishments. If anything, it just shows what a multifaceted artist he was and how deeply he touched the entertainment industry. As seen in the stream of tributes pouring in, he's already very missed.

More like this
'School Of Rock' Changed Joe Keery's Life Forever
By Alyssa Lapid
Is Dua Lipa Dating Trevor Noah? New Photos Show Them Kissing & Hugging
By Brian Anthony Hernandez and Martha Sorren
Everything To Know About Taylor Swift’s 10th Studio Album, 'Midnights'
By Grace Wehniainen and Jake Viswanath
Twitter Is Freaking Out Over Rihanna’s 2023 Super Bowl Halftime Show Announcement
By Stephanie Topacio Long
Get Even More From Bustle — Sign Up For The Newsletter