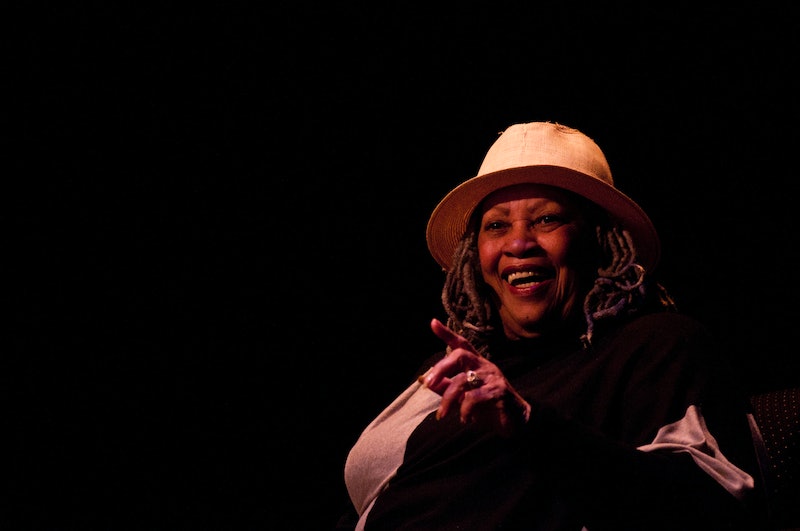 There was sad news for book-lovers on Tuesday morning: Beloved author Toni Morrison died at the age of 88, a representative for her publisher Alfred A. Knopf confirmed in a press release. She passed away Monday night at Montefiore Medical Center in New York, following a brief illness. The award-winning novelist was predeceased in death by a son, Slade Morrison, with whom she co-authored several children's books. She is survived by a son, Harold Ford Morrison, and grandchildren.

Toni Morrison was born Chloe Anthony Wofford in Lorain, Ohio on Feb. 18, 1931, the second of four children born to George and Ramah Wofford. She attended Howard University, graduating in 1953 with a degree in English and the classics, and went on to receive a master's degree from Cornell University in 1955.

After marrying Harold Morrison in 1957, Toni Morrison became a single mother upon their separation in 1963, while pregnant with the couple's second son, Slade. In 1965, Morrison and her sons moved to Syracuse, where she went to work in textbook publishing. Later, before publishing her own novels, Morrison worked as an editor at Random House, where she was the first African American woman to hold such a position.

Morrison also won the 1993 Nobel Prize for Literature, for being an author "who in novels characterized by visionary force and poetic import, gives life to an essential aspect of American reality." In 1996, she received the National Book Foundation’s Medal of Distinguished Contribution to American Letters. President Barack Obama honored Morrison with the Presidential Medal of Freedom in 2012. In May 2019, the American Academy of Arts and Letters bestowed its Gold Award for lifetime achievement upon her.

"It is with profound sadness we share that, following a short illness, our adored mother and grandmother, Toni Morrison, passed away peacefully last night surrounded by family and friends. She was an extremely devoted mother, grandmother, and aunt who reveled in being with her family and friends. The consummate writer who treasured the written word, whether her own, her students or others, she read voraciously and was most at home when writing. Although her passing represents a tremendous loss, we are grateful she had a long, well lived life.

"While we would like to thank everyone who knew and loved her, personally or through her work, for their support at this difficult time, we ask for privacy as we mourn this loss to our family. We will share information in the near future about how we will celebrate Toni’s incredible life."

Toni Morrison's final book, The Source of Self-Regard, is available now wherever books are sold.