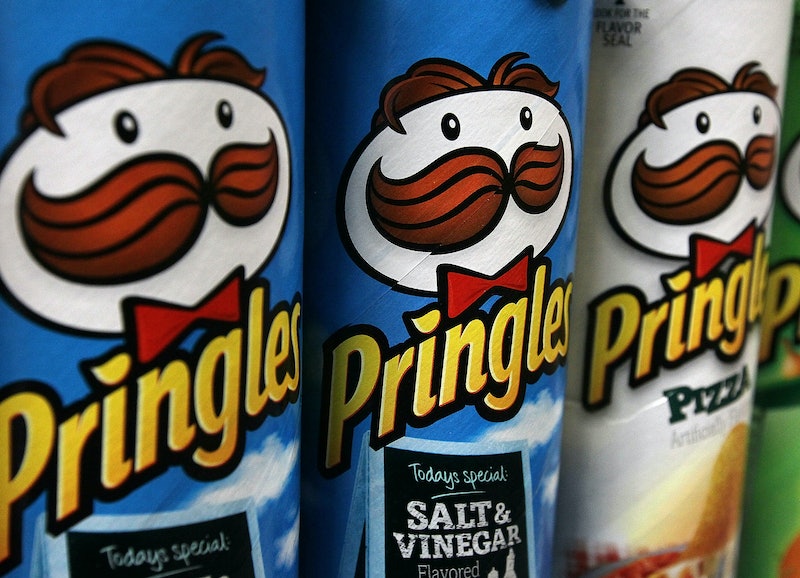 If you thought all the fun chip flavors were off in Canada and Europe, you'd be (mostly) wrong. Sure, they've got all the fun ketchup and paprika chip dust, but Pringles just partnered with Nissin Top Ramen to create maybe the most epic Asian-inspired American chip flavor you'll ever taste. If you're a huge ramen fan and life long lover of potato chips (this is everyone, right?), this new combination is going to make your heart explode. Kind of like when two celebrities that you really like independently start dating and then you're like, "OMG, can my heart handle this much love? How could a better union exist? I want them to stay together for ever and ever!"

This new flavor is called Pringles Nissin Top Ramen Chicken, and like all good things, it's only available for a limited time and only in Dollar General stores. I know, sad face — but are you surprised? The best specials don't stay long.

Anyway. You know when you were in college and you'd be making ramen and you'd taste the seasoning packet on its own be think to yourself, "Damn, this is really good, I could probably do something interesting and non-ramen related with it," and kind of secretly believed you had a million dollar culinary idea on your hands, but then the idea passed and you forgot all about it? Yeah, same. This is me right now:

Well the folks over at Pringles didn't forget about it. They had the same thought and then realized that the seasoning would make the most epic chip flavor dusting, appealing to both dorm room culinary experts and regular humans-alike. The new flavor being sold exclusively at Dollar General stores while supplies last. I don't want to tell you how to live your life, but you might want to seriously consider stocking up on a supply.

Don't worry about what people think of you, be that person who loads up their cart with all you can fit. You'll be the last one laughing when everyone else's chips are gone, and you still have a reserve to snack on. Because once they're gone, they're gone. (And unless you send letters to the president of Pringles every day for a year, I doubt you'll be able to bring them back once they leave shelves. So plan ahead, chip lovers!)

Here's what you'll be looking for in the snack aisle of your dreams, but also the very real Dollar General stores while supplies last:

Ah, now that school's out for the summer, let that very real college nostalgia settle in — this is going to be the new chip of the summer. I never thought it would be a potato chip that would make me miss college so much, alas, the people agree:

We are truly living in the future now, people.

More like this
Why TikTok Is Obsessed With Caesar Salads Right Now
By Alexis Morillo
TikTok's Butter Board Might Be The New Cheese Plate
By Emma Carey
Deliveroo Is Selling Lotus Biscoff Cinnabons Now
By Darshita Goyal
On TikTok, Tinned Fish Date Night Is The Latest Viral Food Obsession
By Emma Carey
Get Even More From Bustle — Sign Up For The Newsletter