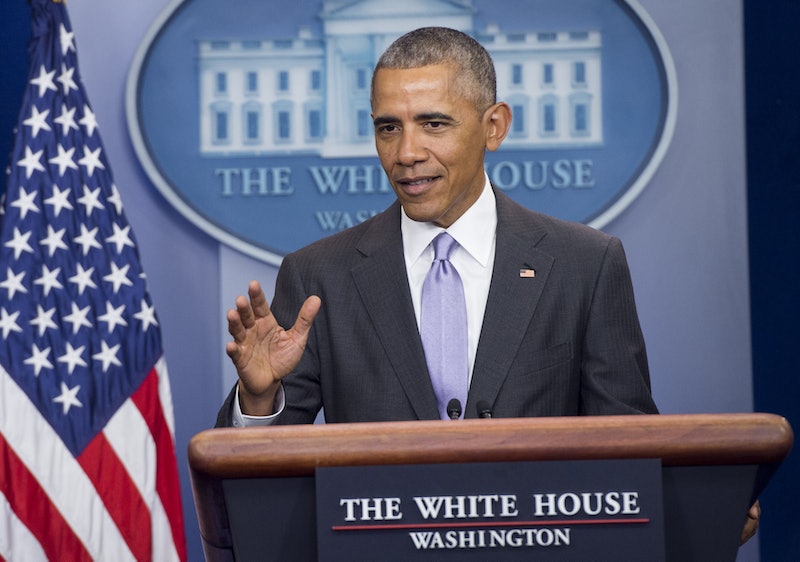 President Barack Obama appeared before reporters one last time for the final press conference of his presidency. He began the meeting with the press by thanking them, saying, "I have enjoyed working with all of you," and advocated for a strong press, asserting that "having you in this building... keeps us honest." This contradicts a story from over the weekend that the incoming Donald Trump administration was considering a plan to move the White House Press briefing room to the Old Executive Office Building.

Although Obama's relationship with the press hasn't always been rosy, no one can say that he hasn't made himself available to the press. Mark Knoller of CBS News noted on twitter that this is Obama's 39th solo White House news conference and 224th press availability of any kind. That works out to the 44th President having made himself available to the press every other week on average of his eight-year presidency. Compare that with the President-elect, who has held only one "press conference" (if that's what you want to call whatever that was) since his election, and only scant other press availabilities.

So, for one last time (at least for the next four years), take a look and enjoy a last non-hostile interaction between our President and our White House Press Corps.

Good afternoon, everybody. Let me start off by saying that I was sorely tempted to wear a tan suit today for my last press conference, but Michelle, whose fashion sense is better than mine, tells me that's not appropriate in January.

I covered a lot of the ground I wanted to cover with my farewell address last week, so I’m just going to say a couple quick things before I start taking questions.

First, we have been in touch with the Bush family today after hearing about President George H.W. Bush and Barbara Bush being admitted to the hospital this morning. They have not only dedicated their lives to this country, they have been a constant source of friendship and support and good counsel to Michelle and me over the years, they are as fine a couple as we know and so we want to send our prayers and our love to them. Really good people.

Second thing I want to do is to thank all of you. Some of you have been covering me for a long time, folks like Christy and Lynn. Some of you I’ve just gotten to know. We have traveled the world together, we hit a few singles, a few doubles together, I’ve offered advice that I thought was pretty sound, like “don’t do stupid stuff,” and even when you complained about my long answers, I just want you to know that the only reason they were long is because you asked six-part questions. But I have enjoyed working with all of you. That does not of course mean that I’ve enjoyed every story that you have filed, but that’s teh point of this relationship. You’re not supposed to by sycophants, you’re supposed to be skeptics, you’re supposed to ask me tough questions. You’re not supposed to be complimentary, but you’re supposed to cast a critical eye on folks who hold enormous power and make sure that we are accountable to the people who sent us here. And you have done that. And you have done it for the most part in ways that I could appreciate for fairness even if I didn’t always agree with your conclusions. And having you in this building has made this place work better, it keeps us honest, it makes us work harder, you’ve made us think about how we are doing what we do and whether or not we’re able to deliver on what’s been requested by our constituents. And, for example, every time you’ve asked “why haven’t you cured Ebola yet?” or “Why is there still that hole in the gulf?” it has given me the ability to go back to my team and say “will you get this solved before the next press conference?”

I’ve spent a lot of time in my farewell address talking about the state of our democracy. IT goes without saying that essential to that is a free press. That is part of how this place, this country, this grand experiment in self-government has to work. It doesn’t work if we don’t have a well-informed citizenry, and you are the conduit through which they receive information about what is taking place in the halls of power. So America needs you and democracy needs you. We need you to establish a baseline of facts and evidence that we can use as a starting point for the kind of reasoned and informed debates that ultimately lead to progress. So my hope is that you will continue with the same tenacity that you showed us to do the hard work of getting to the bottom of stories and getting them right and to push those of us in power to be the best version of ourselves. And to push this country to be the best version of itself. I have no doubt that you will do so. I’m looking forward to being an active consumer of your work, rather than always the subject of it. I want to thank you all for your extraordinary service to our democracy, and with that I will take some questions.