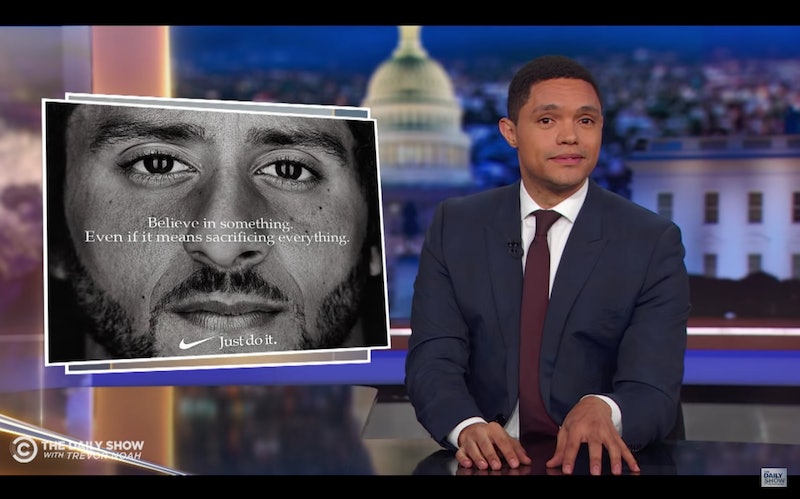 After revealing an ad featuring a famous former San Francisco 49ers quarterback as part of its "Just Do It" 30th anniversary campaign, Nike received both praise and pushback. Many who supported Nike's decision indicated that they would be sure to purchase more goods from the athletic company, while some who opposed the campaign began destroying their own Nike apparel. On his show on Tuesday, host Trevor Noah ruthlessly mocked how Colin Kaepernick critics reacted to Nike's campaign, pointing out that destroying their own possessions perhaps does not send the message they intended.

Nike's poster of Kaepernick features an image of the former quarterback's face accompanied by the phrase, "Believe in something. Even if it means sacrificing everything." The phrase has been interpreted by many as a reference to Kaepernick's advocacy against police violence and racial injustice. In 2016, Kaepernick decided to kneel during the playing of the U.S. national anthem at National Football League games in order to draw attention to the aforementioned issues. Since he became a free agent in 2017, Kaepernick has not been hired by any NFL team — and has accused the NFL of colluding against him because of his advocacy. As the Chicago Tribune reported in Aug. 2018, NFL Commissioner Roger Goodell said that teams make their own individual choices about whether to employ Kaepernick

As Noah described, Kaepernick (and his Nike ad) has many supporters, but also many critics. The late night host then noted how some critics were taking seemingly extreme measures to express their displeasure with Nike. Noah played a Fox Business News clip which revealed that opponents were "ripping [Nike] logos off their clothing" and "burning Nike shoes." The comedian appeared aghast at critics' behavior, questioning what purpose it serves. As Noah put it:

Wow, people are so angry they’re burning their own shoes? You realize Nike already has your money, right? They've already got your money. You're only hurting yourself.

Noah continued by joking that he would "love" to see what happens if people decided they wanted to protest Home Depot. "All the walls in my house must go!," Noah joked, as he imitated a hypothetical Home Depot critic.

The comedian then added that, ironically, the protestors' actions made Nike's shoes seem more appealing, in his view. "I don't know about you, but those flaming Nikes just make me want to pay more. It's almost like an ad, it's like, 'those shoes so fast he burst into flames, man!'"

The host wrapped up his piece on Kaepernick by noting that he "loves" Nike's new ad, adding that he admires Kaepernick for taking a stand. However, he noted that he felt a "little bit bad" for those who oppose it, saying that brands taking a political stance can sometimes come as a surprise to consumers. As Noah joked,

Some of these dudes were walking out of the store yesterday with their new Nikes and people were like, 'yeah, resist!' And they're holding the box like, 'Wait, what? No, no, I just needed arch support!'

Overall, it's quite clear that Noah believes that Kaepernick's critics' decision to destroy their Nike-branded items is self-defeating. It remains to be seen whether or not any critics will take his advice and pursue another protest tactic.