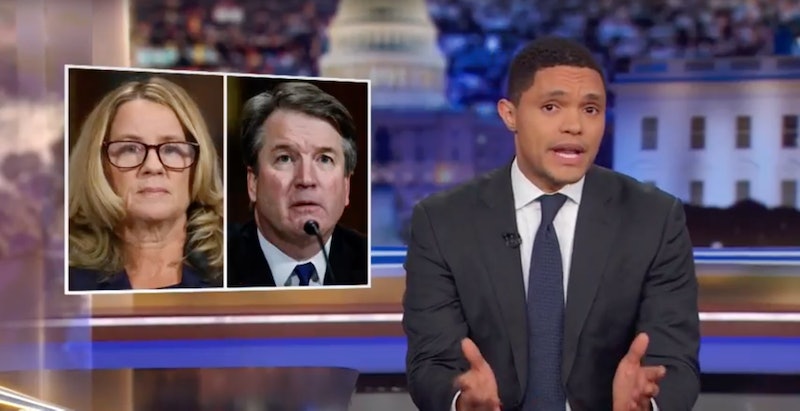 Brett Kavanaugh appeared agitated and angry during much of his Senate Judiciary Committee hearing on Thursday, and according to the host of The Daily Show, that was the SCOTUS nominee demonstrating his true colors. On a segment later that evening, Trevor Noah said Kavanaugh's performance showed the "real" Brett: "You can feel him coming out, it's so crazy to watch."

Noah played clips from the hearing in which Kavanaugh yelled parts of his 45-minute opening statement, including when he shouted that his "confirmation process has become a national disgrace" and that he'd "demanded" that a hearing happen earlier. Kavanaugh's tone was the subject of criticism and many jokes in the aftermath of the hearing; Alexandra Petri at The Washington Post wrote a satirical op-ed about his defensiveness titled, "HOW DARE YOU DO THIS TO BRETT KAVANAUGH?"

Noah took some hits at his demeanor, too. "That's right, I demanded a hearing! You didn't give it to me! I demanded it! Anyway, if you'll put me on the court now, I'm prepared to put my emotions aside and rule fairly and soberly. I think we can all agree I know how to handle my emotions."

From Noah's perspective, Kavanaugh's attitude was revealing. "You could feel real Brett coming through," he said. "I don't know if you saw the interview on Fox — he was all chilled out, and now today he was all angry. You could feel him sneaking through."

Kavanaugh's interview with Fox on Monday did strike a different tone. He appeared to be generally calm and composed then, as he spoke about how he hadn't partied excessively in school and had never gotten so drunk that he didn't remember something from the night before. Lynne Brookes, who knew him during his time at Yale, suggested that he had "lie[d]" during the Fox interview and said, "He's trying to paint himself as some kind of choir boy."

Kavanaugh again seemed intent on conveying on Thursday that his school years hadn't been particularly full of debauchery, but seemed less concerned with adopting a "choir boy" attitude.

"Good lord," Noah said of his temperament. "This guy was such an *sshole, it looked like he was auditioning for a Snickers commercial."

The comedian went on to imitate such a commercial by shouting, "How dare you! Accuse me! Of sexual assault!," before pretending to take a bite of a Snickers bar and calmly saying: "Mmm. Yeah. I did it."

On the other hand, Noah noted that Ford took a polite and deferential tone during her testimony. He played clips of her telling the committee that "I wish I could be more helpful" and suggesting many times that she would explain "whatever you want."

"After all she's been through, she still has such a good, warm attitude," Noah said. "I feel like after the hearings she'd be in the parking lot offering to jump-start people's cars."

"I'm not going to lie, the contrast was striking," Noah said of Ford and Kavanaugh, "because where Dr. Ford was more open to being questioned about her experience, this dude was behaving like the whole thing was just wasting his time."

An initial vote on Kavanaugh's nomination from the members of the Senate Judiciary Committee is expected to take place at 9:30 a.m. ET Friday.

More like this
Romance Authors Are Mobilizing For Reproductive Rights
By Natalia Perez-Gonzalez
Here’s Everything You Need To Know About Operation London Bridge
By Bustle UK
Is Dua Lipa Dating Trevor Noah? New Photos Show Them Kissing & Hugging
By Brian Anthony Hernandez and Martha Sorren
Women Around The World Are Cutting Their Hair In Solidarity With Mahsa Amini
By Darshita Goyal
Get Even More From Bustle — Sign Up For The Newsletter