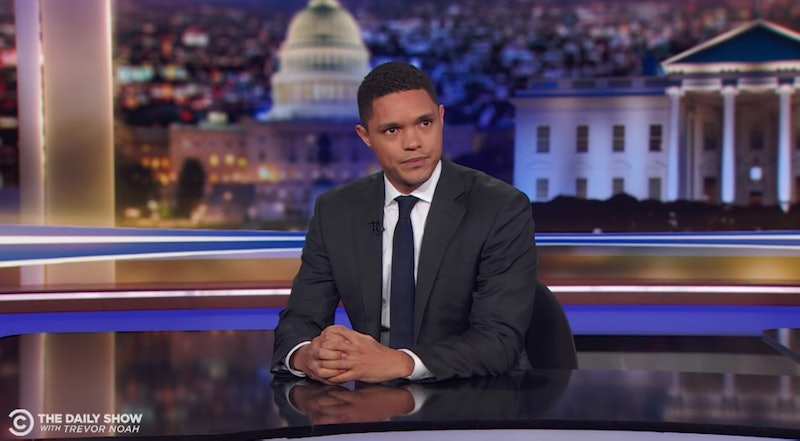 On The Daily Show on Wednesday night, host Trevor Noah took some time to dive into the week's biggest headline story. Instead of talking explicitly about politics, though, Noah took it as an opportunity to explain a universal — and, as he calls it, understandable — reaction people have when they hear something bad about someone they know. In the short segment, Noah says that the "great person" defense of Kavanaugh (and others accused of doing awful things) is a human response, but not one that decides what's real.

To explain this, Noah showed a clip of Sen. Orrin Hatch (R-Utah) responding to a question about if he believes Christine Blasey Ford's allegation that Kavanaugh attempted to sexually assault her as a teenager (Kavanaugh has "categorically and unequivocally" denied this allegation). Hatch said he doesn't believe the allegation, adding, "I know the judge very, very well. I know how honest he is, I know how straightforward he is, I know how he stands up for what he believes and what's right."

Noah's analysis takes aim at that response (while adding that it doesn't necessarily mean he believes that Kavanaugh committed the alleged attempted assault). First, Noah said he believes that Hatch thinks that Kavanaugh is a "great person." But, Noah explained, "People struggle to understand that two things can be contradictory and true at the same time. You could know somebody as a great person, and they could also be doing something that you don't know about that makes them someone that you wouldn't recognize."

Noah said that this happens with famous people accused of heinous crimes, like former CBS chairman Les Moonves, who was accused of sexual assault by 12 women (he called the allegations "untrue"), Bill Cosby, who was found guilty of sexual assault amid dozens of other women's allegations, and Olympic runner Oscar Pistorius, who was found guilty of murdering his girlfriend, when fans don't want to believe that someone whose public figure they followed and admired could have another side.

"Yeah, that's not the Cosby you know," Noah said. "Unfortunately, it's the Cosby somebody else knows — somebody his victim knows."

But, Noah said, it also happens on a much more personal level, like if you find out something you didn't know about your parents as you grow up. And, he went on, it doesn't necessarily have to be that you learn something bad about someone you thought you fully knew — it's just that people are complex and often have a lot more going on than you can see.

"Every single one of us has a side of us that nobody knows about," Noah said, "and it may not be sexual assault for everyone, but it's something. It's like people know you, and then there's the you from your internet search history. There's that you that's completely different."

As it stands now, Ford was invited to testify to the Senate Judiciary Committee on Monday, but she has not yet confirmed that she will. If she does not testify, Republican senators have said that they will go ahead with the vote on Kavanaugh's nomination. There is currently no indication that enough senators would vote against his nomination to block it.

"Just because you know somebody as being good — they may have been good to you. It doesn't mean that they were never bad to somebody else," Noah said to round out his argument.