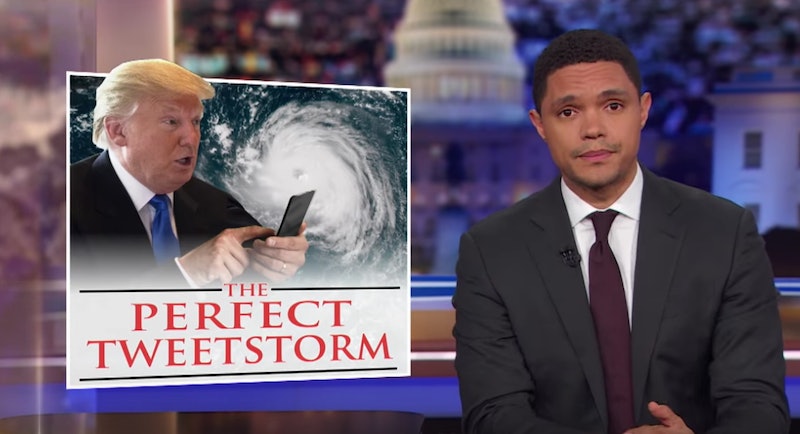 Trevor Noah has been known criticize President Donald Trump with sharp-tongued comedy delivered with a certain boyish charm. But during Thursday’s episode of his show, Noah discussed Trump’s claims about Hurricane Maria, maligning the president for questioning the death toll from the storm, which devastated Puerto Rico around this time last year. Meanwhile, Noah said Trump should be focusing on the crisis at hand: Hurricane Florence, which made landfall near Wrightsville Beach, North Carolina, as a Category 1 hurricane Friday morning.

“Most people are preparing for the impending disaster,” Noah said during his Thursday night show. “President Trump, on the other hand, is still trying to deal with the disaster he’s created for himself.” Noah’s segment came in response to a Thursday morning tweet from the president. Because, of course it did. In the tweet, Trump denied the claims of a George Washington University study that said an estimated 2,975 people died in the six months after the hurricane made landfall last September. The Washington Post reported that the study was accepted by the Puerto Rican authorities.

Yet Trump tweeted, “3000 people did not die in the two hurricanes that hit Puerto Rico,” the president wrote. “When I left the Island, AFTER the storm had hit, they had anywhere from 6 to 18 deaths. As time went by it did not go up by much. Then, a long time later, they started to report really large numbers, like 3000...” The president was criticized by people on both sides of political lines for this statement, The Post noted.

The late night host noted that the GWU study included people who died after the hurricane because they didn’t have access to necessities such as electricity or medical care. He came up with a stunning analogy to exemplify this.

“The effects of a hurricane last long after the storm has actually passed,” Noah said. “The people on the Titanic who froze in the water still died because of the crash. The iceberg wasn’t like: 'Yo, I didn’t kill nobody. I just scrapped some paint off a boat. You can take that other sh*t up with the ocean, man.'”

Noah also slammed Trump for piling this tweet onto Americans when the country is facing another hurricane.

On Thursday afternoon, The Daily Show hinted that it could hit the president hard on Trump’s Puerto Rico comments. In a midday tweet, The Daily Show referenced a new Nike campaign featuring NFL quarterback Colin Kaepernick, which Trump has criticized, according to USA Today.

The Daily Show’s tweet showed Trump’s face and played on the short sentences often used in Nike advertisements. “Believe in something,” the tweet read. “Unless that thing makes you look bad. Just deny it.”

Although Noah's team took a generally light-hearted approach to the president's tweets, they wanted to make it clear that Trump's tweets were "wrong in many ways — factually, morally, grammatically." Because, after all, these are real lives we're talking about and these storms threaten them in a very real way.