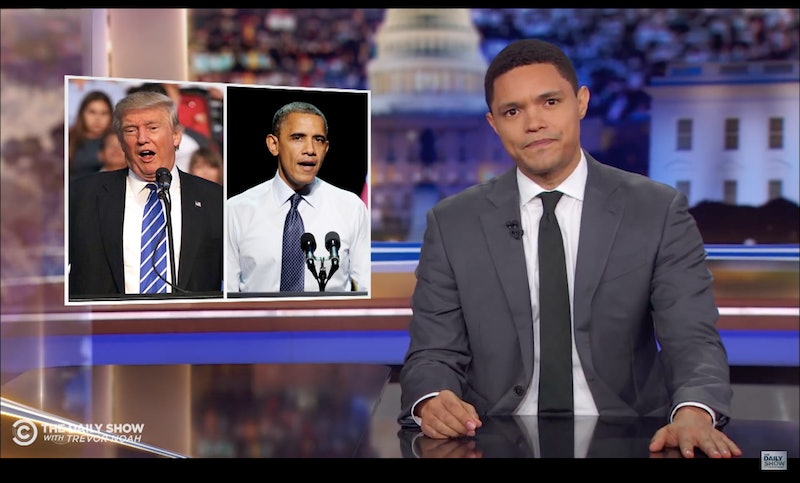 On The Daily Show on Monday, host Trevor Noah's Obama versus Trump segment offered some hilarious insight into the differences between the two men. As Noah asserted, Obama's recent foray into political campaigning ahead of the midterm elections has offered Americans the chance to observe the current and former president's rhetoric and actions side by side, with some pretty intriguing results.

Noah opened his segment by asserting that, while Americans will never know whether Trump could beat Obama in a political race (or vice versa), midterm campaign season has allowed people to see what a race between the two men "might have been like." As Noah pointed out, after shying away from political activity for the beginning of his post-presidency period, Obama has now fully entered into campaign mode — and hasn't hesitated to condemn the Trump administration's policies.

The late-night host then played a clip of Obama reminding an audience at the University of Illinois on Sept. 7 that he was responsible for beginning America's economic recovery. Obama's comments were notable because Trump typically claims that his administration is responsible for the country's strong economy. After playing the clip featuring Obama, Noah pitted the two men in a faux race against each other, exclaiming. "Oh! You guys realize what this means, right? President Obama versus President Trump, the leader versus the tweeter. 'Yes we can' versus 'way too tan.'"

To further highlight the differences between the two men, Noah then showed separate videos of Obama and Trump talking about health care. In Obama's clip, the former president criticized Republicans for seeking to dismantle the Affordable Care Act, saying, "They're sabotaging the Affordable Care Act. It's already cost more than 3 million Americans their health insurance."

In response to Trump's clip, Noah appeared both confused and amused, saying, "You know, I've heard a lot of criticisms of Obamacare, but I can safely say I've never heard that it's going to morph a state into a very giant person. Like, what does that even mean?"

Finally, the comedian wrapped up his segment by playing clips of both Obama and Trump discussing the widely-publicized New York Times op-ed in which a senior official from the Trump administration anonymously discussed the staff "resistance" inside the administration. Noah prefaced the clips by asserting that "While Trump may have beaten Obama on the entertainment part ... it is safe to say that Obama beat Trump on the English part."

Noah played a video of Obama assertively condemning the op-ed writer for still being complicit in perpetuating the Trump administration's policies. He then showed a clip of Trump condemning the author for writing the op-ed — and twice struggling to pronounce the word "anonymous" correctly. After the clip, Noah joked, "I could honestly listen to Trump try to say 'anonymous' for the rest of my life."

Overall, the late-night host's Trump versus Obama segment offered a funny and intriguing look at the starkly different ways in which the two men have approached midterm campaign speeches. Surely there will be much more material for Noah to analyze as campaign season gets into full swing and the presidents continue to stump for their respective parties.