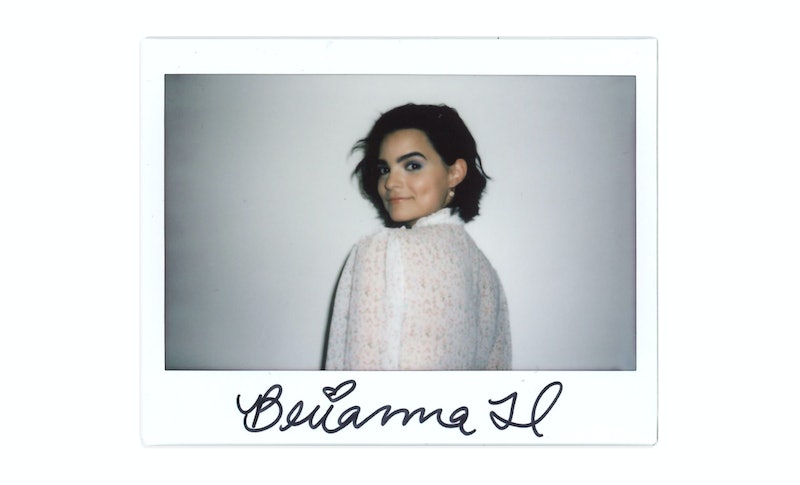 When celebrities hang out with Bustle writers, we want to give them the chance to leave their mark. Literally. So we hand them a pen, a piece of paper, a few questions, and ask them to get creative. The rest is up to them. This time, Trinkets star Brianna Hildebrand is leaving her mark in the Bustle Booth.

Most people are happy that they can put their high school days behind them. But for actors like Brianna Hildebrand, star of Netflix's new teen drama Trinkets, re-living those days is just part of the job — and the actor admits she had some cringeworthy moments. "I look back on some of those things that I did as a kid and I'm like, 'Who are you'?" Hildebrand tells Bustle, laughing. "How did your parents let you sleep in this house?"

Growing up in Texas, Hildebrand started out as an aspiring singer-songwriter who made CDs for her dad to listen to on the way to work. After hearing one of them, a talent scout insisted Hildebrand enroll in an acting, modeling, and talent competition. It was there that she met her current manager, who convinced her to move to Los Angeles at age 17.

After that, things started moving quickly for Hildebrand. “I started taking acting class every night,” she recalls. Soon after, she landed the role that put her on the map, playing Negasonic Teenage Warhead in Deadpool. It's a memorable role, but Hildebrand has no intention of letting Negasonic define her. “Ever since Deadpool, I kind of play angst-y, apathetic type of characters,” she says. “I wanted to challenge myself.”

That led her to Netflix's new YA show Trinkets, in which she plays Elodie, an awkward and soft-spoken teen with a shoplifting addiction. “I feel like she's ridiculously relatable,” Hildebrand says. “Everyone has those times when they feel like they've said the wrong thing, or they feel like they look the weirdest in the room.” And Hildebrand doesn’t just relate Elodie, she admires her, too. “She doesn’t put up a front ever. She's never anybody else for anybody else. She’s always just Elodie, living in the awkwardness of her life.”

Hildebrand relates to more than Elodie’s awkwardness. As an openly bisexual actor and advocate, Hildebrand is drawn to LGBTQ+ characters and stories. “I was initially deciding between Elodie and Moe,” she recalls of the casting process for Trinkets. “They mentioned to me that Elodie would — they were thinking about making her queer, or that she would have a queer storyline, and I was like, ‘Well then, Elodie it is.’”

Starting with Negasonic, Marvel’s first openly gay superhero, Hildebrand has consistently played characters she feels are moving the industry forward. “I think it’s cool that this is even something we can do now in the industry,” she says of being able to depict nuanced LGBTQ+ characters like Elodie in Trinkets. “Twenty, 30 years ago, it's not — it was not as chill. I feel honored to be a part of the change.”

And it’s not just political: for Hildebrand, these stories hold huge emotional weight. She recalls reading the script of First Girl I Loved (a 2016 indie she calls her first "lesbian film") over and over. “I just realized, like, I've never seen this, you know?” she says. “I was so excited about it. And that's how I feel every time I get a queer character. I'm like: ‘Oh, something new, fun. This is like my life.”

Check out Hildebrand’s answers to our Bustle Booth questionnaire below.

More like this
'That '90s Show' Star Callie Haverda Got Advice From Mila Kunis & Ashton Kutcher
By Brad Witter
Hailee Kaleem Wright's Topsy-Turvy Path From MTV To Broadway
By Samantha Leach
Here’s What Happens To Bill & Frank In 'The Last Of Us' Video Game
By Brad Witter
Brianna Revealed Why 'The Bachelor' Premiere Was Tougher For Her Than You Saw On TV
By Brad Witter
Get Even More From Bustle — Sign Up For The Newsletter
From hair trends to relationship advice, our daily newsletter has everything you need to sound like a person who’s on TikTok, even if you aren’t.