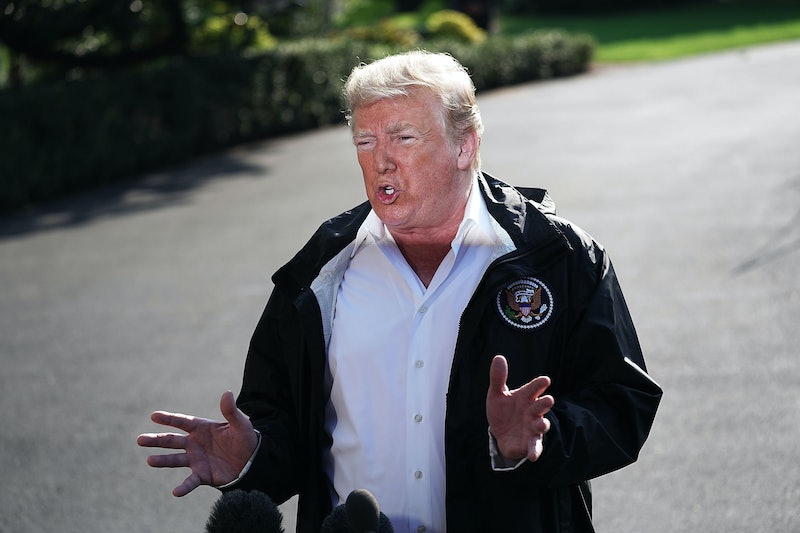 During a briefing on Hurricane Florence in North Carolina Wednesday, President Trump asked officials how Lake Norman, a beach near Charlotte, was holding up amidst the storm. Trump owns a golf course on Lake Norman, although he claimed during the briefing that he "can't tell" why the region is of particular interest to him.

Trump National Golf Course Charlotte, previously the Point Lake and Golf Club, is located on the shores of Lake Norman. The president, who purchased the club for $3 million in 2012, was told that the area is doing just fine, according to the White House pool report. Bustle has reached out to the White House for clarification on why Trump focused on the wellbeing of Lake Norman.

Florence began as a tropical wave off the coast of Africa in August before strengthening into a hurricane. It made landfall in North Carolina in mid-September and has killed at least 37 people across three states since then, according to CBS News.

The damage in North Carolina has been especially severe. Around 343,000 people in the state are without power, CBS News reports, and rainfall has topped 36 inches in some cities, causing massive flooding across the state and making Florence "one of the most significant rainfall events" in North or South Carolina, according to the National Weather Service. The storm has also killed over three million poultry chickens and thousands of pigs in the Tarheel State, the state Department of Agriculture & Consumer Services said.

As a result, over 1,000 roads in the state are closed due to flooding, the North Carolina Department of Transportation said. According to early estimates, Florence may have already caused as much as $22 billion in damage, CBS News reports, making it one of the 10 costliest hurricanes in U.S. history.

While speaking to the press Monday, Gov. Roy Cooper expressed optimism for North Carolina's recovery efforts, and encouraged residents to help each other manage the fallout from the storm.

“North Carolinians are resilient and we will come back from this," Cooper said, according to the New Bern Sun Journal. "Right now it’s hard, and we have to depend on each other to help your neighbor."

However, the governor also said that it may take the state years to recover from Florence's wrath.

“I do know that we will bounce back and that this community will recover. I know the kind of people who live here and I know North Carolinians want to help,” Cooper said. “But I do know there is a long road to recovery in the days, weeks, months and even years ahead.”

The president previously mentioned Lake Norman during an August trip to North Carolina, according to the Charlotte observer, wrongly claiming in a speech that it's the "largest man-made lake in the world by far." According to the dam engineering firm Tata & Howard, Lake Norman isn't even one of the 10 largest man-made lakes in the United States, let alone the largest on the planet.