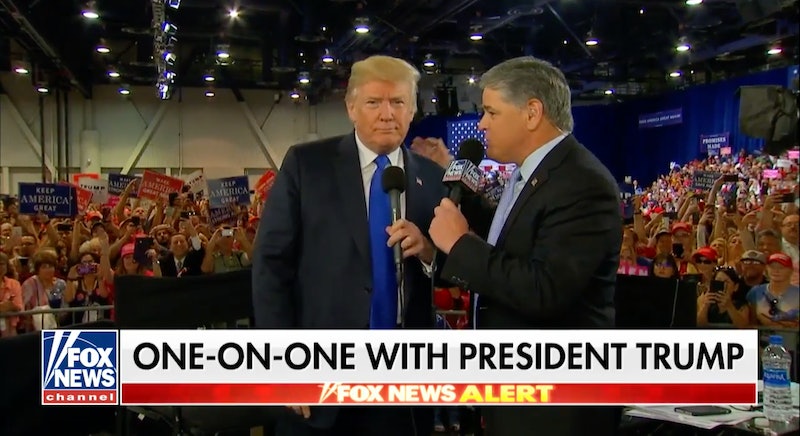 Ahead of a hearing on Monday to examine the sexual misconduct allegation against Brett Kavanaugh (which he denies), his accuser is requesting an FBI investigation into the matter before she testifies. On Thursday, joining a number of Republican senators who have dismissed the request, President Trump asked Sean Hannity why Christine Ford didn't "call the FBI 36 years ago," right after she alleges the assault occurred.

"You could say why didn't someone call the FBI 36 years ago?" Trump said in a live interview with Hannity before a rally in Las Vegas. "You can also say, when did this all happen? What is going on?" The president lamented the effects of the allegation on Kavanaugh's nomination, saying, "I think it’s a very sad situation, he’s an outstanding person. … To see what’s going on is just very, very sad."

Last week, The New Yorker reported on an anonymous sexual assault allegation against Kavanaugh, and then on Sunday night Ford went on the record in a piece by The Washington Post to tell her story in more detail. According to The Post, Ford alleges that while she and Kavanaugh were in high school, he held her down at a party, attempted to remove her clothing, and held his hand over her mouth to stifle her screams. The Post corroborated Ford's allegations with notes her therapist made in 2012.

Kavanaugh has categorically denied the accusations. In a statement released by the White House on Saturday, Kavanaugh said, "I categorically and unequivocally deny this allegation. I did not do this back in high school or at any time." Ford also alleged that a school friend of Kavanaugh's, Mark Judge, was present during the assault. Last week Judge initially said he had no recollection of the event, but later denied that it happened.

Since the news exploded last week, conservative media outlets and others have criticized Ford and sexual violence awareness advocates are calling questions like the presidents' victim-blaming. "Everyone who’s saying, 'Why didn’t she come forward earlier? Why did she hold on to this for so long?' is really steeped in that rape culture," End Rape On Campus Executive Director Jess Davidson told Vox on Monday.

According to The Post, Ford wrestled with going public for over a month, fearing public shaming and abuse. In the last week, according to her lawyers, Ford has received death threats, had her email hacked, and been forced her to move out of her house to ensure her and her family's safety.

Following the allegations, Senate Judiciary Committee chair Sen. Chuck Grassley of Iowa postponed the confirmation vote on Kavanaugh's nomination, and scheduled an additional hearing for Monday. Ford and her lawyers, along with Democratic senators, have criticized the committee for rushing proceedings without a follow-up investigation, and for not including additional witnesses — such as Judge — in the hearings.

Even so, Republicans appear adamant to get a vote underway before the midterm elections. By offering Ford multiple options to testify, "Republicans extended a hand in good faith," Sen. Bob Corker of Tennessee tweeted on Tuesday. "If we don’t hear from both sides on Monday, let’s vote." The president echoed Corker's sentiment in his Hannity interview. "I don’t think you can delay it any longer, he said. "They’ve delayed it a week already."