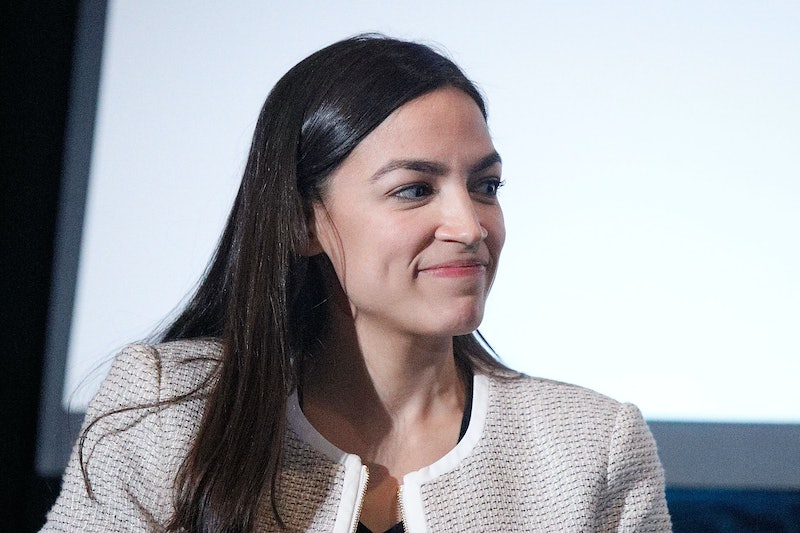 President Donald Trump has openly admitted that he doesn't want Republicans to undermine the Green New Deal too much because he wants to run against it in the 2020 election. But apparently he can't entirely resist criticizing the proposal, as well as its biggest champion. At the National Republican Congressional Committee dinner on Tuesday night, Trump called Alexandria Ocasio-Cortez a "young bartender" to mock her and the proposal.

"A young bartender, wonderful young woman," Trump continued. "The Green New Deal. It's crazy. The first time I heard it I said, 'That's the craziest thing.' You have senators that are professionals — and you guys know — that have been there for a long time; white hair, everything perfect. And they're standing behind her and they're shaking. They're petrified of her."

Some veteran Democrats in Congress do reportedly feel wary of Ocasio-Cortez. In January, Politico reported that some were attempting to "rein in" the young representative, particularly because she's reportedly advocated for primaries against moderate members of the party. The New York Times also reported that her primary threats have made some Democrats nervous. Ocasio-Cortez has pushed back against specific claims that she wants to find a primary challenger for Rep. Hakeem Jeffries, however.

Meanwhile, polls show that Ocasio-Cortez is popular among Democrats, according to Vox. She's one of the most famous members of Congress. And her interaction rate on social media outshines just about everyone in D.C., including Trump, according to The Guardian. Some Democratic voters have described her as the future of the Democratic Party.

Ocasio-Cortez has been on Trump's radar since she beat former Rep. Joe Crowley in a June primary. He seemed to celebrate her win then, calling Crowley a "Big Trump Hater" who "should have been nicer, and more respectful, to his President." In August, the president claimed he had predicted Ocasio-Cortez's victory.

Now he's adopted a frequently mocking tone towards her. At 29, Ocasio-Cortez is the youngest member of Congress, as well as the youngest woman to have ever served in the body. By contrast, the average age of incoming members this year was 47, per Business Insider.

Ocasio-Cortez's youth certainly sets her apart, but it's also sparked disparagement beyond Trump's remarks this week. Right-wing pundit Tucker Carlson attacked her age earlier this week: In response to her marketing the Green New Deal as a moral imperative, Carlson asked how someone "who has not yet turned 30 ... get[s] the right to lecture me about morality." Liberal commentators have previously come to Ocasio-Cortez's defense, arguing that her experience level has weighed too heavily in the critiques against her.

For her part, Ocasio-Cortez often refers to her age as a strength. "An entire generation, which is now becoming one of the largest electorates in America, came of age and never saw American prosperity," she told TIME magazine last month. "I have never seen that, or experienced it, really, in my adult life."

Ocasio-Cortez believes she has a better perspective on the problems facing the United States today than many of her older colleagues in Congress.