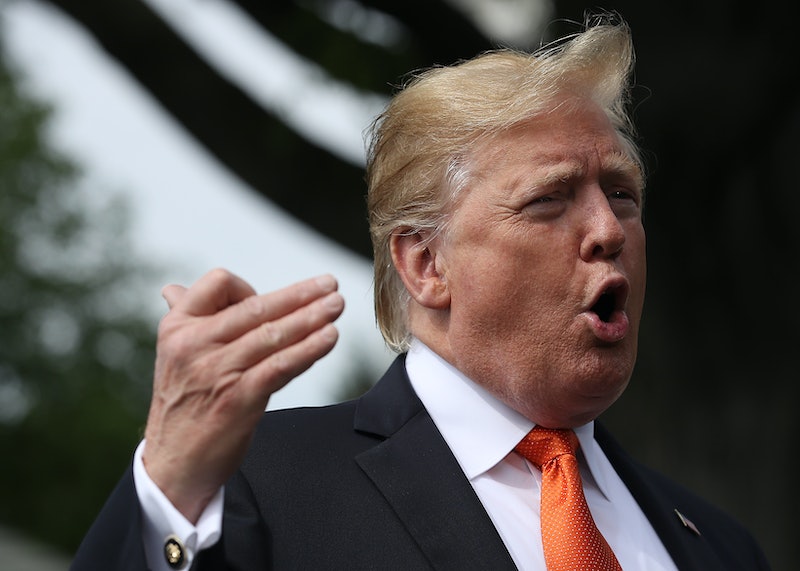 It's no secret that President Donald Trump is particular about his image. Shortly after his election in 2016, the president expressed frustration at being caught, forever on film, with a double chin. More recently, however, Trump claimed photographers make him look "terrible" in photos on purpose while speaking to children visiting the White House as part of Take Your Daughters and Sons to Work Day.

"You've visited with our terrific presidential photographers. Very talented people," a White House transcript revealed Trump said Thursday while speaking to the children of both White House staffers and the press corp on the South Lawn. "You've seen people from all over the world — some of the great pictures that they get. Very talented, talented people. I wish they could make me look just a little bit better."

The president went on to suggest that photographers were purposefully snapping shots of him from unflattering angles. "Sometimes I think they do it on purpose, actually," he told the children. "They give me pictures — always my chin is pulled way in. I look terrible. But that's OK. They do that on purpose."

This isn't the first time Trump has appeared to express some dismay at how he appears in photographs. In 2016, Politico reported that he'd accused NBC News President Deborah Turness of never publishing "a nice photo" of him and instead choosing pictures where he had a double chin.

But Trump's apparent frustration with supposedly "terrible" photographs hasn't kept him from allowing photographers to snap away. According to Wired magazine, while former President Barack Obama had limited the press' opportunities to photograph him in exchange for giving then-White House photographer Pete Souza unrestrained access, Trump began his presidency with a more photojournalist-friendly policy. The magazine reported Trump would hold "as many as five photo ops daily."

Still, the Trump White House reportedly doesn't make it easy for photographers to capture great photos. In fact, Wired's Laura Mallonee characterized many of the photos coming out of Trump's White House as "awkward," "impersonal," "formulaic," and "aggressively boring." What's more Mallonee claimed the administration "has done little to foster an ideal environment in which [photographers] can work" by restricting them to using only available light and often relegating them to the back of the room.

On Thursday, however, Trump appeared to be more accepting of the media, which he has repeatedly described as being the "enemy of the people" in the past. "They are reporting — your parents — on our country and that's the White House Press Corps," a White House transcript revealed he told visiting children. "They let you know how we're doing. And oftentimes, they report correctly. Actually, most of the time."

The president then asked the children belonging to members of the White House press corps if their parents reported the news correctly "all the time or most of the time," eliciting a chorus of "all the time."