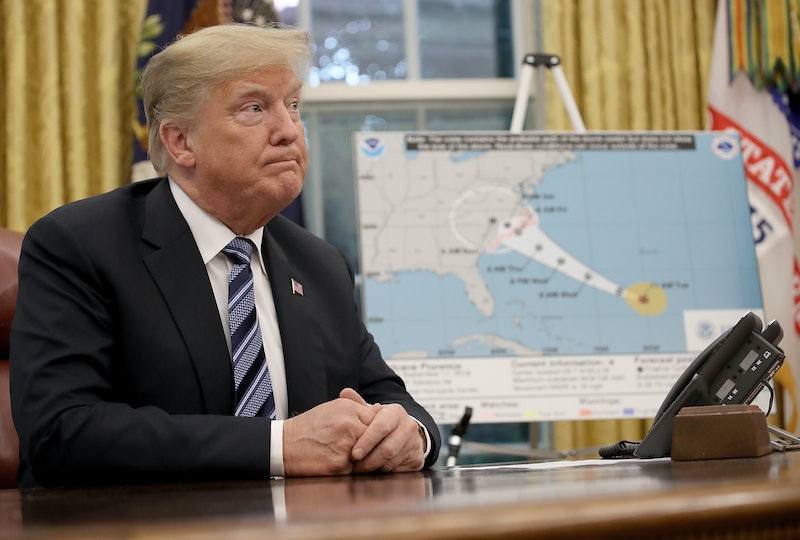 With a potentially devastating hurricane inching closer to the East Coast, officials are advising locals in the region to take precautionary measures. Among those who have issued a warning is President Donald Trump, who described Hurricane Florence as "tremendously wet and tremendously big" while speaking to reporters on Tuesday.

"The safety of American people is my absolute highest priority," he said in his remarks in the Oval Office, according to The Hill. "We are sparing no expense. We are totally prepared. We are ready. We are ready as anybody has ever been. And, uh, it looks to me and it looks to all of a lot of very talented people that do this for a living like this is going to be a storm that's going to be a very large one."

Trump added that "perhaps [in] decades," the eastern region had not seen a tropical system as powerful as Hurricane Florence. He also said that he doubted the projected pathway for the Category 4 storm would change.

"Places that are in the way and in the most jeopardy would be Virginia, North Carolina, South Carolina, that area. They haven't seen anything like what's coming at us in 25, 30 years. Maybe ever. It's tremendously big and tremendously wet. Tremendous amounts of water," Trump added.

On Twitter, Trump's description of Hurricane Florence as a "big and wet" storm elicited incredulity and in other cases, simple hilarity. Fortune magazine's editor Rachel King tweeted, "Good luck, Carolinas. You're clearly on your own with this one."

Forbes contributor Curtis Silver tweeted, "[I'm] glad we have an expert weighing in on the subject of the physical properties of RAIN."

Some were just stunned.

The director and executive producer for NBC's This Is Us, Ken Olin, tweeted, "What's tremendously big and tremendously wet?"

In another case, LGBT activist Eric Rsswood tweeted, "During the FEMA meeting, Trump says the hurricane is 'tremendously big and tremendously wet.' What is this? A preschool presentation? I guess this explains his handling of Puerto Rico." The region suffered massive civilian and infrastructure damage after Hurricane Maria and Irma pummeled it in 2017.

After Trump's comments aired, writer Gloria Fallon wondered on Twitter, "Does anybody in the White House prepare him for public speaking? Could someone please try?" Radio journalist Duane Patterson pleaded, "Dear Lord, please bring back the Teleprompter of the United States. I know I mocked its usage when [Barack] Obama relied on it heavily, but when Donald Trump describes Florence as tremendously big and tremendously wet, the prompter needs 24/7 attention."