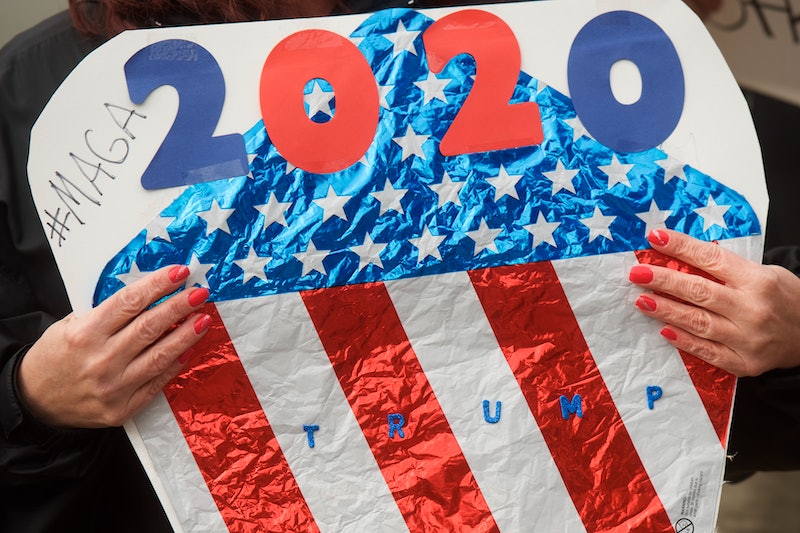 It's not just Democrats who are wondering which candidate will climb to the top of the pile and face President Donald Trump in the 2020 presidential election. Trump himself has evidently given the matter some thought too. When he discussed it on a radio show, however, he left out an entire category of prominent Democratic candidates. Trump named 2020 Democratic candidates he might run against — but he didn't mention a single woman, despite the fact that six have declared their candidacies.

The president was doing an interview with SiriusXM and Fox Nation program host David Webb, speculating about whom he might end up facing in 2020, as The Hill described. He mentioned Bernie Sanders, Joe Biden — who hasn't yet formally declared his candidacy — and "the mayor from Indiana," a reference to surging candidate Pete Buttigieg, who is currently the mayor of South Bend, Indiana.

"I think I'd like running against him, too," Trump said, referring to Buttigieg. "But it'll be interesting to see it unfold."

Trump also compared Sanders and Biden, still ignoring all of the women in the race.

"I think I put out yesterday, it could be Bernie, and it could be Biden. And I think Sleepy Joe's going to have a hard time. He's, you know, 1% Joe," Trump told Webb, as The Hill wrote.

"I don't think he's going to make it, and I don't, I don't know that Bernie - it may be Bernie has the most spirit over there right now," Trump continued.

This came soon after Trump comments on Sanders' appearance at a Fox News town hall, in which he called Sanders "Crazy Bernie" and said it was "so weird" to watch him on Fox News in a Tuesday tweet. Trump has also previously commented on Biden's potential candidacy, for example with a remark appearing to belittle Biden about the allegations Biden was facing about inappropriate behavior, as CNN noted. Politico reported in March that Trump had privately expressed concerns about potentially facing Biden, but he didn't give voice to any of these concerns in his interview with Webb — or in a tweet on the same subject.

"I believe it will be Crazy Bernie Sanders vs. Sleepy Joe Biden as the two finalists to run against maybe the best Economy in the history of our Country (and MANY other great things)!" Trump tweeted on Tuesday. "I look forward to facing whoever it may be. May God Rest Their Soul!"

Trump was perhaps giving a hint that he'll be attempting to frame the election in economic terms, but he hasn't offered any additional comment on the tweet. The last line — which is, of course, usually said after someone has passed away — also raised questions, as NBC News mentioned, but the president hasn't addressed it. While Biden didn't respond, Sanders did tweet a response.

"Looks like President Trump is scared of our campaign," Sanders wrote on Tuesday. "He should be."

And while Trump hasn't mentioned it publicly, there is definitely a chance that his eventual opponent will be a women. Currently, five of them, all serving members of Congress, have qualified for the first Democratic debate, according to New York Magazine: Sens. Kamala Harris, Amy Klobuchar, Elizabeth Warren, Kirsten Gillibrand, and Rep. Tulsi Gabbard. Biden and Sanders are prominent now — and Buttigieg certainly still seems like a rising star — but there's a long time between now and the 2020 Democratic convention.

Correction: A previous version of this story misstated David Webb's relationship to Fox. It has been updated.