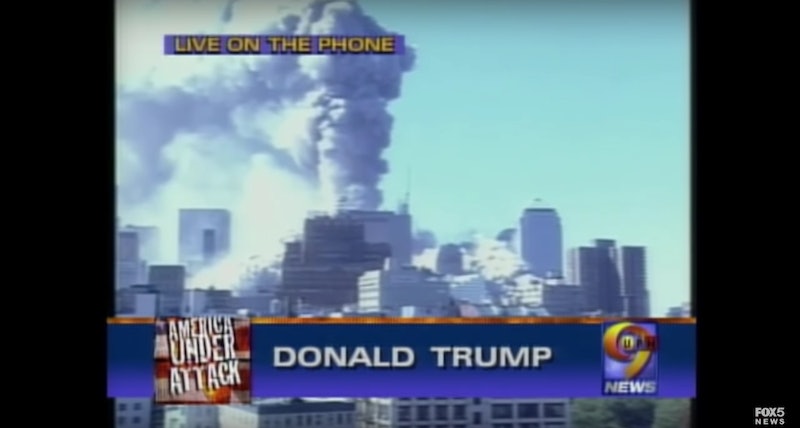 At the time of the Sept. 11 terrorist attacks, President Donald Trump was a real estate developer in New York City. He experienced it as close-up as anyone in the country. But after a TV station called him up to talk about the tragedy on 9/11, Trump bragged that he now owned the "tallest building" in New York.

“40 Wall Street actually was the second-tallest building in downtown Manhattan, and it was actually, before the World Trade Center, was the tallest," Trump said in an interview with a New Jersey radio station, according to the Washington Post. His longtime spokesman, Alan Marcus, had asked him on-air whether his property at 40 Wall Street had suffered any damage, but Trump response started with a discussion of the building's size.

"And then, when they built the World Trade Center, it became known as the second tallest. And now it’s the tallest," Trump then went on.

The TV station, as the Post reported, was WWOR, out of Secaucus, New Jersey. The station's news director had contacted Marcus, asking if he could get Trump on the line for a phone interview in the middle of their 9/11 coverage.

“He was nervous about the interview,” Marcus told the Post.

This was already the afternoon of Sept. 11, when the Twin Towers had already fallen, and the nation was simply trying to process what was going on.

“I have a window that looks directly at the World Trade Center, and I saw this huge explosion,” Trump said, according to the Post. “I really couldn’t even believe it. Now, I’m looking at absolutely nothing. It’s just gone. It’s just hard to believe.”

When a further question led to Trump talking about his building being the tallest in the city, though, the news anchor on air then, Brenda Blackmon, said that Trump's answer "stunned" her and Marcus, the Post reported.

“Any reaction I had, in the midst of everything that was happening, was, wow, that’s insensitive. It just was,” Blackmon told the Post.

The same interview also gave Trump a chance to discuss his political ambitions, as Politico reported in 2016.

“In the year 2000, Donald, you considered running for president," Marcus asked Trump, according to Politico. "If you had done that, and if you had been successful, what do you think you’d be doing right now?”

“Well, I’d be taking a very, very tough line. I mean, you know, most people feel they know at least approximately the group of people that did this and where they are," Trump said in response. "But boy would you have to take a hard line on this. This just can’t be tolerated.”

As president, Trump has now commemorated the 17th anniversary of that day with a series of tweets and with a visit to the newly completed Flight 93 memorial in Shanksville, Pennsylvania.