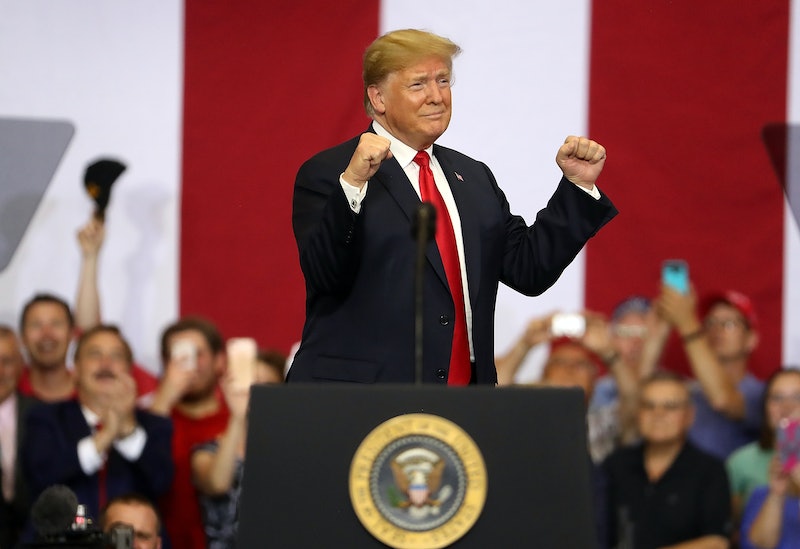 In a speech at the University of Illinois-Urbana Champaign Friday, Barack Obama delivered a harsh condemnation of President Trump and the Republican Party, calling out his successor by name for the first time since leaving office and telling listeners to vote in the midterms "because our democracy depends on it." Later in the day, Trump responded to Obama's speech with an attempted zinger, telling supporters that it put him to sleep.

"I'm sorry, I watched it, but I fell asleep," Trump said of Obama's speech at a rally in Fargo. "I've found he's very good, very good for sleeping."

Later, after rattling off a list of actions his administration has taken, Trump proclaimed that his own speech was "much more exciting than listening to President Obama speak." Fox News cut away from Trump's speech moments later.

In his speech, Obama sought to contextualize Trump's rise and presidency, telling students at the university that Trump "is the symptom, not the cause" of long-running tensions in American politics.

"He's just capitalizing on resentments that politicians have been fanning for years," Obama said. "A fear, an anger, that's rooted in our past but is also borne out of the enormous upheavals that have taken place in your brief lifetimes."

Striking the familiar bipartisan tone that marked his rhetoric as president, Obama noted that at times in American history, fear-based politics "has infected both parties."

"Southern Democrats were the bigger defenders of slavery. It took a Republican president, Abraham Lincoln, to end it," Obama noted. "Neither party has had a monopoly on wisdom. Neither party has been exclusively responsible for us going backwards instead of forwards."

Then, however, Obama explained that despite this varied history, the Republican Party has been disproportionately guilty of stoking fear and resentment over the last several decades.

"But I have to say this. 'Cause sometimes we hear, 'Oh, a plague on both your houses,'" Obama said. "Over the past few decades, the politics of division and resentment, and paranoia, has unfortunately found a home in the Republican Party."

Obama mentioned Trump by name several times, which was the first time he's done so since the 2016 election, and some interpreted his speech as an opening for Democrats heading into the midterm elections. Notably, he came out in favor of "Medicare-for-all" — that is, single-payer health care, an ambitious and progressive policy goal that's so far been divisive within the Democratic Party.

The Republican National Committee denounced Obama's speech, noting (accurately) that the former president "stepped back into the spotlight to make the case that our country is on the wrong track."

"2016 is over, but President Obama is still dismissing the millions of voters across the country who rejected a continuation of his policies in favor of President Trump's plan for historic tax cuts, new jobs and economic growth," RNC spokesperson Ellie Hockenbury said in a statement. Trump received nearly 3 million fewer votes in the 2016 election than Hillary Clinton, whom Obama endorsed.

In his speech, Obama also addressed the Trump administration official who, in an anonymous New York Times op-ed, claimed to be resisting the president from within the government.

"They're not doing us a service by actively promoting 90 percent of the crazy stuff that's coming out of this White House, and then saying, 'Don't worry, we're preventing the other 10 percent,'" Obama said. “That’s not how our democracy’s supposed to work."