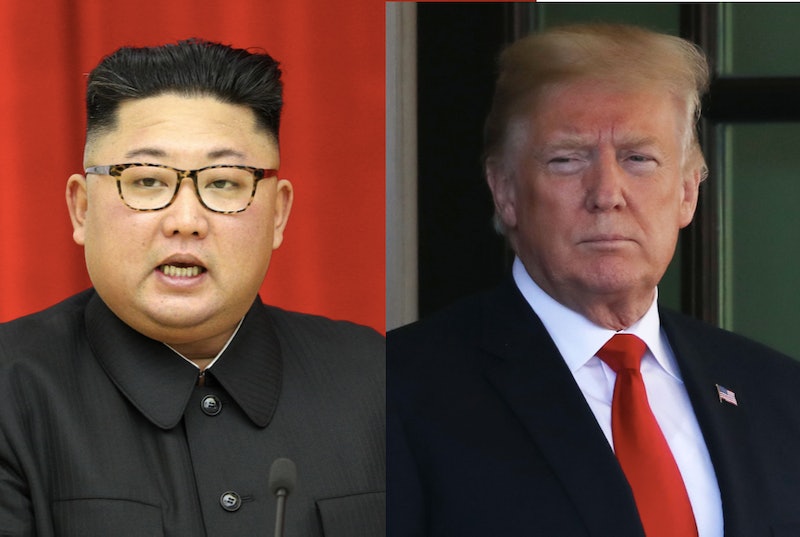 At a campaign rally in West Virginia on Saturday, President Donald Trump went over his relationship with North Korean dictator Kim Jong-un. It sounded more like a recap of a Tinder date rather than one of the most fraught areas of American foreign relations. Trump said Kim and he "fell in love" and pointed to the letters that they'd exchanged as the reason why.

The two met for the first time in Singapore in June, and Trump left the summit promising a deal that would see North Korea denuclearize. Experts have questioned whether the North is really dismantling its nuclear arsenal. But for Trump, the connection was apparently very real.

Trump didn't jump straight to using the word "love" during his speech. "I like him, he likes me," Trump told the crowd first. "I guess that's OK. Am I allowed to say that?"

Then he went over how they had come to get to know each other, not just at the summit but in an exchange of letters, again sounding more like The Notebook than Foreign Affairs magazine:

I was really being tough — and so was he. And we would go back and forth. And then we fell in love, OK? No, really — he wrote me beautiful letters, and they’re great letters. We fell in love.

This came just a few hours after North Korean Minister Ri Yong-ho addressed the United Nations General Assembly and called on the United States to make some concessions first before the country will denuclearize. "Without any trust in the United States, there will be no confidence in our national security, and under such circumstances there is no way we will unilaterally disarm ourselves first," Ri told the world leaders gathered for the meeting.

Trump's comments pretty much set Twitter users up for jokes, reactions, and commentary that was widely shared Saturday night and early Sunday. "Trump literally said that the Murderous [sic] dictator and sworn enemy of the United States, Kim Jong Un and him 'Fell in Love’ with each other," Brian Krassenstein wrote. "I'm falling more and more in love with the 25th Amendment personally..."

"On a more serious note: Trump said he fell in love with Kim even as a evidence suggests Kim has been building new nukes all along," political scientist David Rothkopf said.

Robert Kelly, a professor of political science working at a university in Busan, South Korea, wrote a thread on how he is "resistant" to Trump's diplomacy with the North. "He’s doing it for all the wrong reasons - flattery, admiration, TV coverage. He’s swayed by the most transparent fawning: Kim wrote a 'beautiful' letter, and now we love him. Please. A high school student could see through that. Why would we trust someone like that with something this important?"

Trump saw these reactions coming, but it didn't stop him. "You know what they'll say, 'Donald Trump said they fell in love! How horrible, how horrible is that! So unpresidential,'" Trump said just seconds after his first comments at the rally.

Twitter users seemed to be arguing just that — and joking about it, too.