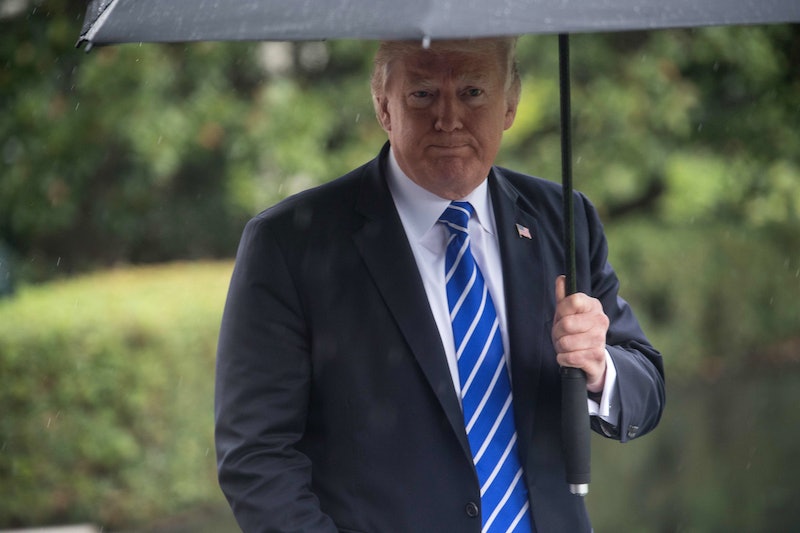 On Wednesday morning around 2 a.m. ET, Hurricane Irma made landfall in the Caribbean. With sustained maximum winds of 185 mph, Irma has already made a mark as one of the most powerful storms in the history of the Atlantic Ocean. Speaking in front of reporters on Wednesday, after President Trump said Hurricane Irma "will not be good," Twitter users immediately jumped at what seemed like a gross understatement of a huge hurricane that forecasters have labeled "potentially catastrophic."

Trump made a reference to the Hurricane Harvey relief efforts in Texas, and promised to steer emergency resources towards Florida, where Irma appears to be heading toward. "It looks like it could be something that will be not good," Trump said, "Believe me. Not good."

Many saw it as a gross understatement of the most powerful hurricane to cross the Atlantic Ocean, with sustained winds of 185 mph. In response to Breitbart's White House correspondent Charlie Spiering's tweet quoting the president, Twitter user Spiroth wrote: "It's a sad state of affairs when I'm literally not sure if this is a joke or a real quote."

Another Twitter user dryly joked that Trump's comment should dispel the rumors that the Category 5 storm was "one of those good hurricanes." Others expressed how stunned they were that the president was describing a potentially deadly hurricane so inarticulately.

Irma barreled through several Caribbean islands early on Wednesday morning, and could hit Florida by this weekend, then potentially pummel other parts of the East Coast. Florida Gov. Rick Scott issued a statewide emergency earlier in the week and mandatory evacuation orders in some parts of the state. On ABC News' Good Morning America on Wednesday, Scott warned that Irma could be worse than Hurricane Andrew, the most destructive hurricane to hit the state yet, adding:

We don't know exactly where this is going to hit. It sure looks like it's going to bear down right in the middle of Florida. ... I'm asking everybody as you get prepared, three days of water per person, three days of food. Take enough but take only what you need, don't take more.

Trump has conveyed the sense of emergency over Hurricane Irma differently, however. On Wednesday, he tweeted, "Watching Hurricane closely. My team, which has done, and is doing, such a good job in Texas, is already in Florida. No rest for the weary!" Then, sparking more criticism over his seeming fascination with the hurricane above its potential impact on the U.S., he added later: "Hurricane looks like largest ever recorded in the Atlantic!"

While the president's use of language is certainly questionable to many people, one thing's for sure: Amidst the mockery, it seems like everyone can all agree that Hurricane Irma could be, in fact, one of the most dangerous and devastating storms to hit the U.S. yet.