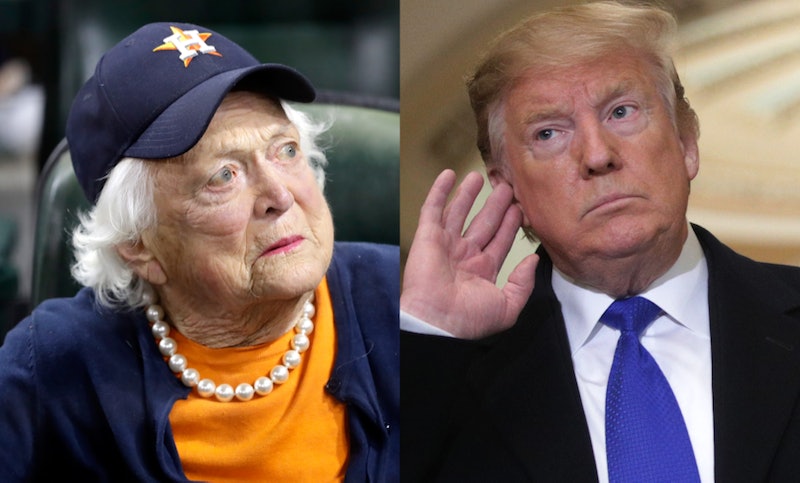 President Donald Trump is lashing out as a new book about a certain former first lady sheds light on how much she reportedly disliked the 45th president. In an interview with The Washington Times on Thursday, Trump said Barbara Bush "should" have resented him because of his behavior toward former President George W. Bush and Jeb Bush.

"I have heard that she was nasty to me, but she should be," Trump told The Washington Times. "Look what I did to her sons."

The president and the Bush family have had a notorious feud for years. In his Thursday interview, Trump emphasized the fact that he beat Jeb in the 2016 Republican primaries. "Look, she's the mother of somebody that I competed against," he said. "Most people thought he was going to win and he was quickly out." Jeb left the race in February 2016, months before GOP delegates ultimately chose their nominee.

"I hit him very hard in South Carolina," Trump added. "Remember? He was supposed to win South Carolina and I won it in a landslide. I hit him so hard." Much of the conventional wisdom at the time held that Trump wouldn't win the state; rival GOP candidates hoped that his New York origins would make him unpopular there, according to the Los Angeles Times.

"That's when his brother came to make the first speech for him," Trump told The Washington Times, referencing when George went on the campaign trail for Jeb just before the South Carolina primary. "And I said, 'What took you so long?'"

Trump has made it clear that he dislikes some of the 43rd president's policy choices. In 2013, he tweeted that George "made some really bad decisions" and that "we need another Bush in office about as much as we need Obama to have a 3rd term." George has criticized Trump many times in return, and was quoted in the 2017 book The Last Republicans as saying, "This guy doesn't know what it means to be president."

Barbara Bush was also open about her dislike for Trump, and Susan Page's new book The Matriarch: Barbara Bush and the Making of an American Dynasty makes it clear just how deep that dislike ran. Page writes that Bush began criticizing Trump in her diary in the '90s and kept a countdown clock for his presidency next to her bed until the day she died.

The former first lady told Page that "angst" over Trump's win was partially responsible for her worsening health problems, according to the book. She even said a few months before her death that she no longer considered herself a Republican in the Trump era, Page writes.

"In an interview with me in October 2017, she answered that question yes," Page writes, according to USA Today. "When I asked her again four months later, in February 2018, she said, 'I'd probably say no today.'" Page describes that change of heart as a "stunning acknowledgement."

Some commentators are criticizing Trump's latest remarks about Bush. But the president has made it clear that he doesn't mind making harsh comments about the recently deceased.