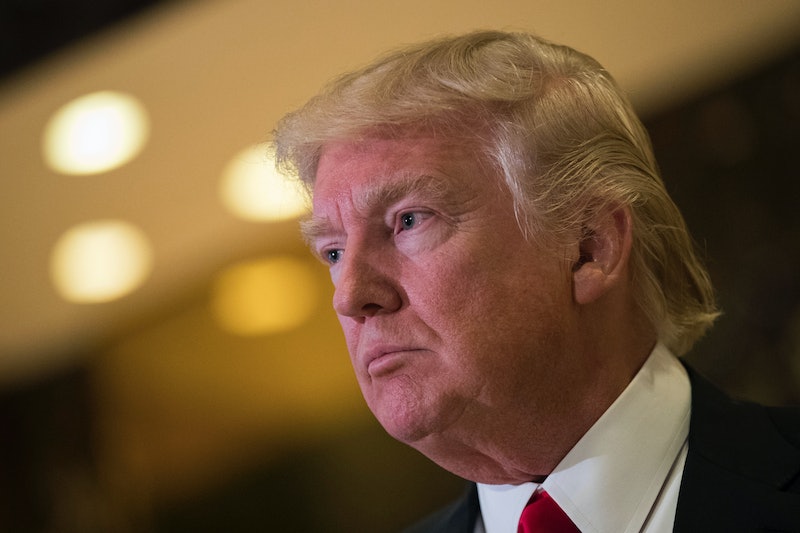 For a while now, some members of the Democratic Party have made it a point to call for impeaching President Donald Trump. But based on his recent remarks, it doesn't seem like the president is worried at all. When asked by a reporter whether he was concerned about impeachment, Trump said, "Not even a little bit," according to The Daily Beast on Monday.

Further discussing impeachment, Trump tweeted on Monday: "Only high crimes and misdemeanors can lead to impeachment. There were no crimes by me (No Collusion, No Obstruction), so you can’t impeach. It was the Democrats that committed the crimes, not your Republican President! Tables are finally turning on the Witch Hunt!"

Reports about Trump's apparent nonchalance come several days after Attorney General William Barr released a redacted version of Special Counsel Robert Mueller's report on the Russia probe. Ultimately, the report did not conclude that Trump collaborated with Russia during the 2016 presidential race. Still, it does not exonerate Trump either.

The report does state that the "evidence we obtained about the President's actions and intent presents difficult issues that prevent us from conclusively determining that no criminal conduct occurred." It also pointedly notes that the 2016 presidential campaign arm for Trump "would benefit electorally from information stolen and released through Russian efforts."

In the past, some Democratic representatives like Pramila Jayapal, Rashida Tlaib, Joaquin Castro, and Al Green have called for impeaching Trump. On Friday, Massachusetts Sen. Elizabeth Warren — who recently announced her 2020 presidential bid — called on for impeachment proceedings against Trump after Barr released the Mueller report.

"The Mueller report lays out facts showing that a hostile foreign government attacked our 2016 election to help Donald Trump and Donald Trump welcomed that help. Once elected, Donald Trump obstructed the investigation into that attack," Warren stated. "Mueller put the next step in the hands of Congress: 'Congress has authority to prohibit a President's corrupt use of his authority in order to protect the integrity of the administration of justice.' The correct process for exercising that authority is impeachment."

Still, even within the blue party, there is a difference of opinion on the subject. In March, House Speaker Nancy Pelosi told The Washington Post that she was, in fact, against the idea of impeaching the president. In Pelosi's words, Trump was "just not worth it."

It may be surprising for some people to see the president seem so indifferent to the subject but, for what it's worth, Trump has previously — and rather unapologetically — rebuffed calls for impeaching him. In January, Trump tweeted: "As I have stated many times, if the Democrats take over the House or Senate, there will be disruption to the Financial Markets. We won the Senate, they won the House."

"Things will settle down," Trump added. "They only want to impeach me because they know they can’t win in 2020, too much success!" With his press remarks on Monday, it seems like Trump is just continuing to brush off calls for him to step down as president.