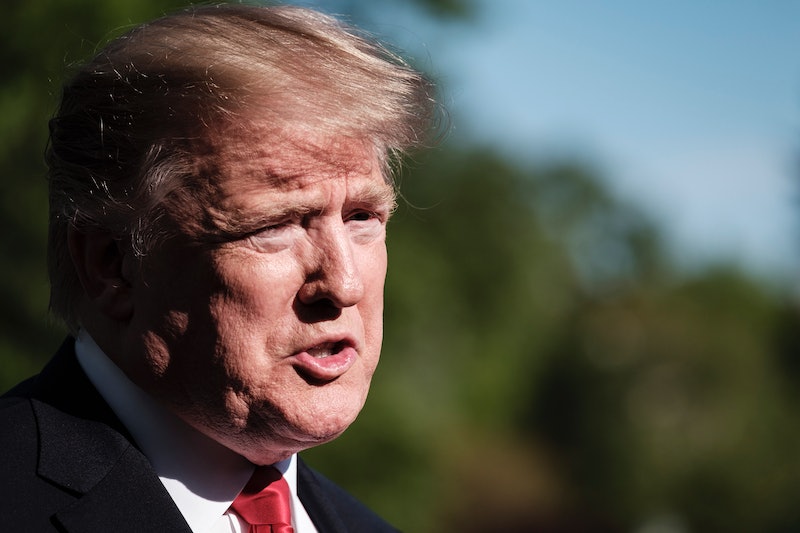 In an interview with Maria Bartiromo on Fox News' Sunday Morning Futures, the president talked about families being kept together at the border, suggesting it makes the country too attractive to migrants. President Trump said the border is "like Disneyland" and said that "you have 10 times more people coming up with their families" now that family separation is no longer administration policy. "It's a disaster," he continued.

Meanwhile, along the border, new reports from The Guardian point to recent arrivals being held in tents. That is perhaps a step up from cages as reported by the BBC, and holding cells under bridges as reported by BuzzFeed News. Both those solutions were not just for adult migrants, according to the reports, but children, too. Bustle reached out to the White House for comment.

"It's like Disneyland now," Trump told Bartiromo Sunday. "Before you would get separated and some people would say let's not go up. Now, you don't get separated, and while that sounds nice and all, what happens is you have ten times as many people coming up because they know they're not going to be separated from their children. So it turned out to be a disincentive, which is obviously a disaster. It's a disaster."

Trump's "Disneyland" comment was part of a long phone interview conducted by Bartiromo that focused on migration. "The problem is we have to register them, we have to bring them to court," Trump told Bartiromo. He went on to share his envy of countries that don't give asylum seekers due process and say "'sorry, you can’t come into our country' and they walk them out."

"We don’t need a court system, we have a court system that is – has 900,000 cases behind it," Trump said. "In other words, they have a court which needs to hear 900,000 cases, how ridiculous is this? This has been building up from years, from many years." The backlog has risen sharply under Trump, ABC News reported. In March, BuzzFeed News reported that the administration pressed pause on hiring judges that could tackle that backlog.

In addition to denouncing the laws and the legal process set up in the United States to deal with migrants, including refugees and asylum seekers, Trump criticized lawyers who try to help migrants seeking asylum.

"You have lawyers standing at the border, our people, lawyers, wise guys standing at the border, signing people up," Trump told Bartiromo. "Every time they catch a cold they try and blame Border Patrol." Some four migrants, including two young children, have died while in Border Patrol custody in the past months, according to CNN. Bustle reached out to Customs & Border Protection for comment.

Trump also said he would be pushing for a bill that would overhaul immigration — a "much bigger package" than other recent proposals.