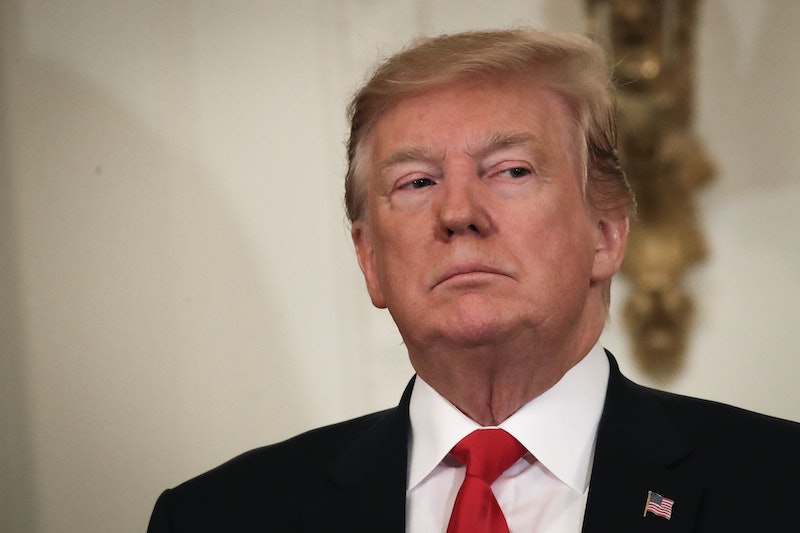 President Donald Trump has gone to great lengths so far to make sure that his personal tax returns never see the light of day, despite the fact that his predecessors have voluntarily shared theirs for decades. Now, after the Democratic-controlled House Oversight Committee started an investigation into Trump's finances and subpoenaed his longtime accounting firm for years worth of information, Trump is suing House Democrats for trying to find anything out about his financial situation.

The House Oversight Committee issued a subpoena to Mazars, an accounting firm that Trump has relied on for several years to prepare tax documents for himself and the Trump Organization, as CNBC reported. Trump's lawyers, however, hit back against that subpoena with a lawsuit claiming that it was an "abuse of power" by House Democrats.

"The committee's attempt to obtain years' worth of confidential information from their accountants lacks any legitimate legislative purposes, is an abuse of power, and is just another example of overreach by the president's political opponents," reads the joint statement from the lawyers on the case, William Consovoy and Stefan Passantino (who is only representing the Trump companies), according to CBS News. "We look forward to vindicating our clients' rights in this matter."

Bustle has reached out to Consovoy and the House Oversight Committee for comment.

Consovoy is also the lawyer representing Trump in a similar effort to prevent the House Ways and Means Committee from obtaining Trump's tax returns, according to CBS News. The Ways and Means Committee used a longstanding IRS code to formally request that the agency send them several years of the president's tax returns, but as CBS News reported, Consovoy called the request a "dangerous precedent" and requested that the Office of Legal Counsel of the Justice Department make a legal ruling before the IRS could move forward.

"[Ways and Means committee chairman Richard Neal's] request is a transparent effort by one political party to harass an official from the other party because they dislike his politics and speech," Consovoy wrote, regarding that effort. Now, Consovoy and Trump's other lawyers have taken a similar stance towards the Mazars subpoena.

The House Oversight Committee's move to bring Trump's tax returns into the public eye is a bit different, since they're interacting with his accounting firm rather than directly with the IRS. According to Fortune, then, it means that Trump is suing as a private citizen in this case. The lawsuit claims that because the House Oversight Committee doesn't have a “legitimate legislative purpose" in subpoenaing Trump's financial records, the request amounts to overreach.

“Its goal is to expose plaintiffs’ private financial information for the sake of exposure, with the hope that it will turn up something that Democrats can use as a political tool against the President now and in the 2020 election,” the lawsuit alleges, according to Fortune.

One of Trump's personal lawyers, Jay Sekulow, had a more direct response to the subpoena, telling NBC News that “We will not allow Congressional Presidential harassment to go unanswered.”

Mazars, for its part, informed the House Oversight Committee that it would provide the financial records in response to a subpoena, as CNN wrote. As it stands right now, there's no telling which way things will go.