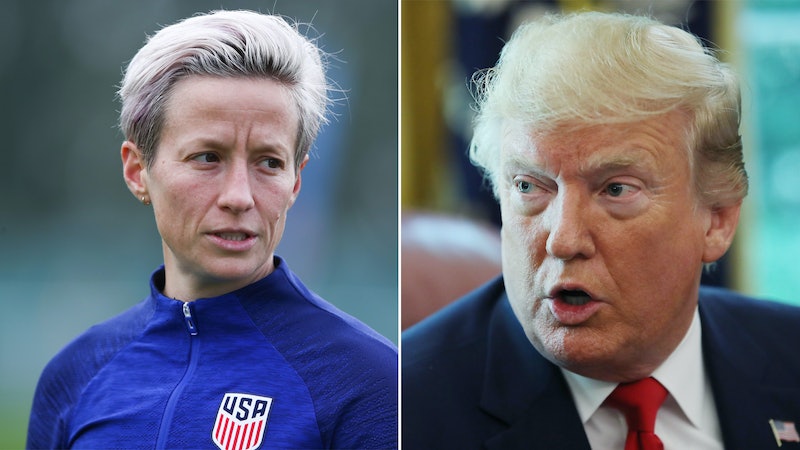 President Trump does not approve of star U.S. women's soccer player Megan Rapinoe's silent protest during the national anthem, but he seems to be potentially fine with her being paid less than her male counterparts. Asked by The Hill about the gender pay gap in soccer, Trump said equal pay has to do with economics but didn't take a clear stance on women being paid less than men. He added he hadn't "taken a position" on the issue.

Trump commented on a number of U.S. women's soccer issues in the interview on Monday, the same day that the U.S. team beat Spain in the Women's World Cup, moving on to the quarterfinals against France. The next game will be played on Friday in Paris.

Trump responded to a question about equal pay, according to the piece published by The Hill. "I think a lot of it also has to do with the economics," he told the D.C. news outlet. "I mean who draws more, where is the money coming in. I know that when you have the great stars like [Portugal’s Cristiano] Ronaldo and some of these stars ... that get paid a lot of money, but they draw hundreds of thousands of people."

"But I haven’t taken a position on that at all. I’d have to look at it," he added, according to The Hill.

The economic argument, though, doesn't hold weight according to a report in The Wall Street Journal last week that showed U.S. women's soccer games make more money than U.S. men's soccer games. The paper looked at financial records and reports from the U.S. Soccer Federation (USSF) in order to present its findings.

Before that data was reported, all 28 players of the women's team, or USWNT, filed a lawsuit against USSF. Just before the beginning of the 2019 tournament, they alleged gender discrimination with regards to their pay, according to ESPN.

"Despite the fact that these female and male players are called upon to perform the same job responsibilities on their teams and participate in international competitions for their single common employer, the USSF, the female players have been consistently paid less money than their male counterparts," documents from the lawsuit obtained by ESPN read. "This is true even though their performance has been superior to that of the male players — with the female players, in contrast to male players, becoming world champions."

The economic argument, though, could ultimately play a key role in that suit, The Journal reported.

Rapinoe spoke out about the equal pay lawsuit. "I don't know if there was a tipping point, but the feeling was that this was the next best step for us to put us in the best possible position to continue to fight for what we believe is right and what the law recognizes," Rapinoe told ESPN in March. "And to try to achieve equality under the law, equal working conditions, equal working pay."

Any player who has been on the team since 2015 can join the suit. Rapinoe also told ESPN that the "unity and togetherness" that the lawsuit shows is really important. "Just that idea of women supporting women and backing each other, creating something together that is much larger and more impactful than they could on their own," she added.

Rapinoe has been a regular critic of the Trump administration, and her silent protest at Monday's game is the latest of many. Asked about whether her protests were "appropriate" on Monday, Trump told The Hill, "No. I don’t think so."

That may very well be his opinion on Rapinoe, but for equal pay there are facts he has to contend with.

More like this
The 2023 Super Bowl Commercials Feature A 'Breaking Bad' Reunion & Missy Elliott
By Alyssa Lapid
11 Super Bowl Instagram Captions To Use On Game Day — Even If You Don’t Like Sports
By Alexis Morillo
Twitter Is Shook As Tom Brady Holds Back Tears Announcing His 2nd Retirement
By Marina Watts
All The Ways You Can Watch The Super Bowl In The UK
By Asyia Iftikhar and Darshita Goyal
Get Even More From Bustle — Sign Up For The Newsletter
From hair trends to relationship advice, our daily newsletter has everything you need to sound like a person who’s on TikTok, even if you aren’t.