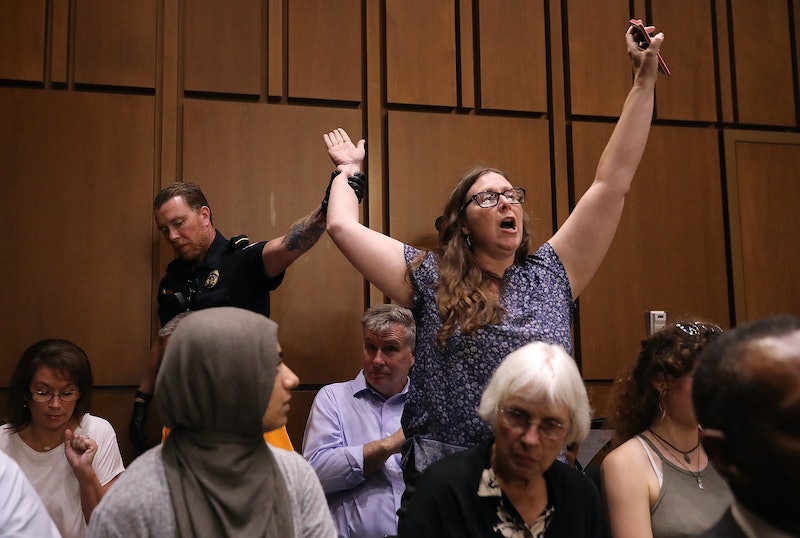 As the latest Supreme Court justice nominee entered the first day of his confirmation hearings on Tuesday, the session was met with chaotic protests. And, as you might imagine, the president did not respond favorably to any of this, according to The Daily Caller's exclusive Oval Office interview. Trump thought protesters at Brett Kavanaugh's hearings were "embarrassing" to the country and expressed dismay that people had allowed "the interruptions to continue."

“There [are] some people that just keep screaming," Trump said, criticizing the multiple protesters who disrupted the first day of the proceedings, to the Daily Caller. “In the old days, we used to throw them out. Today, I guess they just keep screaming.”

Protesters interrupted the start of the hearings, with some shouting for impeachment and senators to oppose the confirmation while others stayed silent in a wave of Handmaid's Tale red cloaks. Most of the protesters were women, Politico reported, and 70 people supposedly ended up being arrested by Capitol Hill police, with many charged for disorderly conduct. Kavanaugh seemed to ignore the commotion, choosing to sit in silence and stare ahead, according to Business Insider.

During Senator Orrin Hatch's speech supporting Kavanaugh's confirmation, protesters yelled over him, leading to a visibly annoyed response from the senator, according to The Hill. Hatch equated the demonstrators' behavior to "insolence" and further blasted the protesters, calling one of them a "loud mouth." His response reportedly earned Trump's praise, per The Daily Caller.

“I don’t know why they don’t take care of a situation like that. I think it’s embarrassing for the country to allow protestors. You don’t even know what side the protesters are on.” Trump said, according to The Daily Caller. “To allow somebody to stand up and scream from the top of their lungs — and nobody does anything about it — is, frankly … I think it is an embarrassment.”

The president also took to his Twitter account on Tuesday, calling those who opposed Kavanaugh's confirmation "despicable."

"The Brett Kavanaugh hearings for the future Justice of the Supreme Court are truly a display of how mean, angry, and despicable the other side is," Trump tweeted. "They will say anything, and are only looking to inflict pain and embarrassment to one of the most highly renowned jurists to ever appear before Congress. So sad to see!"

This is not the first time that the president has expressed hostility toward the public's right to protest. Since Colin Kaepernick first kneeled in 2016, Trump has repeatedly censured NFL players who kneel during the national anthem to protest racial injustice and police brutality.

In August, Trump resurrected his earlier criticisms of players, saying, in part, "A football game, that fans are paying soooo much money to watch and enjoy, is no place to protest. Most of that money goes to the players anyway. Find another way to protest. Stand proudly for your National Anthem or be Suspended Without Pay!"

But even before the NFL protests, Trump's history of aggression toward protesters was apparent during his time on the campaign trail, when people frequently interrupted his rallies. In one instance, Trump told the crowd in Cedar Rapids, Iowa that he would pay for their legal fees if they did "knock the crap" out of protesters. In another, he told members of a Las Vegas rally about a protester whom he believed security guards had been too gentle with, saying he wanted to "punch him in the face."

The right to protest is protected by the first amendment. And as the whole of America has done since its inception, there's little doubt people will continue to express their beliefs through freedom of speech.