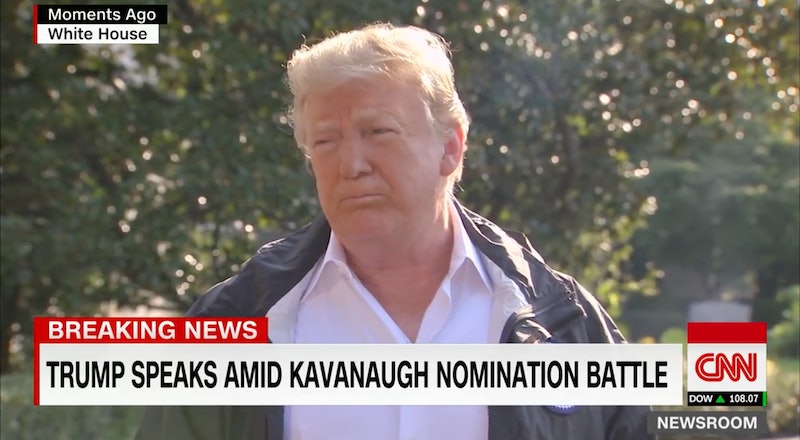 President Donald Trump stepped out of the White House on Wednesday, and once again into the controversy surrounding his Supreme Court pick, Brett Kavanaugh. Trump still stands by his man — for the third day in a row he he sang his praises — but he also said explicitly that he'd like to hear from the judge's accuser. Trump wants to see what Christine Ford has to say about Kavanaugh.

The judge's confirmation process timeline remains unclear as the Senate Judiciary Committee and Kavanaugh's accuser, Christine Ford, work out under what terms she will testify. She wants an FBI investigation into her allegations of assault (which Kavanaugh denies). Committee Chair Sen. Chuck Grassley (R-Iowa) and the Republicans would rather skip that.

Trump was on his way to North Carolina to survey the response to Hurricane Florence when he stopped to take some questions from reporters. Asked about Kavanaugh, he mostly spoke positively about the candidate — often calling him "Justice Kavanaugh." But the president also said he wants to hear from Ford. "I really want to see her," Trump told reporters over the roar of helicopter engines. "I really would want to see what she has to say."

Trump also left open the door to her testimony changing the course of the confirmation hearings. "Look, if she shows up and makes a credible showing, that will be very interesting and we’ll have to make a decision. But I can only say this: he’s such an outstanding man — very hard for me to imagine that anything happened," Trump said.

As for the requested FBI investigation, Trump said, "It seems that the FBI really doesn't do that." In 1991, when Anita Hill came forward to accuse Clarence Thomas of sexual harassment (which he denied), the Senate Judiciary Committee informed the White House and President George H.W. Bush requested an FBI investigation (which took just three days).

A reporter responded to Trump saying that the FBI would investigate if Trump asked them, and asked if he would do so. "Well, I would let the senators take their course, let the senators do what..." Trump said, trailing off. "They're doing a very good job. They've given a tremendous amount of time, they've already postponed a major hearing."

Whether or not an investigation is called for, Grassley is pushing to move ahead and accused Sen. Dianne Feinstein (D-California) of trying to delay the confirmation by requesting the investigation only now when she first received a letter in July from Ford (Feinstein says she was keeping it confidential). "A simple answer to that would be why didn’t Dianne Feinstein send the request to the FBI on July the 30th instead of now?" Grassley said Wednesday.

Trump also pushed for the confirmation hearing to move on to make things easier on Kavanaugh and his family in his comments to reporters. "I think he’s an extraordinary man," Trump said of the judge. "I think he’s a man of great intellect, as I’ve been telling you, and he had this unblemished record. This is a very tough thing for him and his family. And we want to get it over with."

Grassley has said he will push for Ford to testify through this Friday.