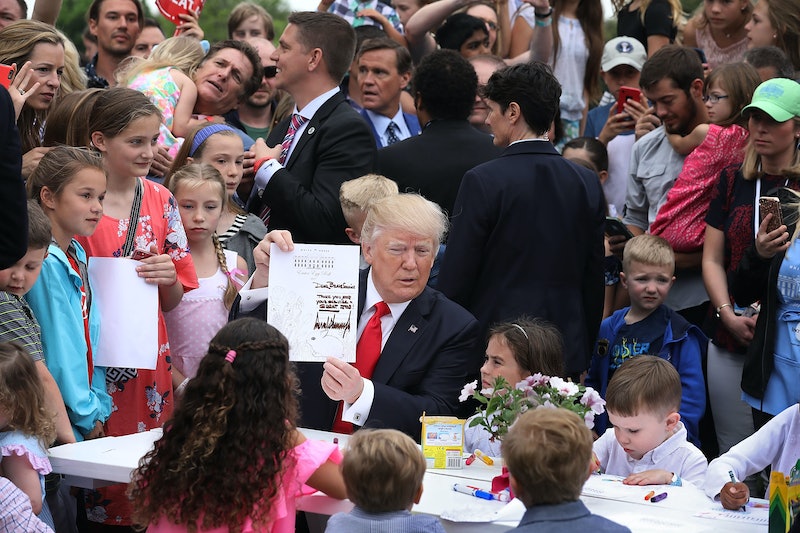 Over the holiday weekend, President Trump's 2019 White House Easter Egg Roll took place — and a pretty interesting conversation unfolded between the president and a child, according to Politico. Per the publication, POTUS was coloring cards for service members with children on the lawn when one of the children reportedly asked him about the border wall. Trump took the opportunity to give a border wall update, and to predict the future for this young child.

The exact question that the child posed is unknown. However, Politico reports that Trump said to the child, “I will. Oh, It’s happening. It’s being built now." Trump then spoke up to nearby reporters, adding clarity to the situation. "Here’s a young guy who said, ‘Keep building that wall,'" Trump said. "Can you believe that? He’s going to be a conservative someday!”

It wasn't the only time the president addressed political topics in conversation during the holiday event, which marked the 141st anniversary of the tradition and drew over 30,000 families, spectators, and children, according to The Washington Post. Throughout the events of the day, Trump also addressed questions surrounding the recent calls for his impeachment, and additionally claimed the U.S. Military was in the process of being "completely rebuilt."

According to The Washington Post, Trump was asked at one point during the Egg Roll whether he was "worried" about impeachment proceedings following the release of the Mueller report last week. Trump replied, “Not even a little bit.”

At another point during the day, according to Newsweek, Trump said,

Trump further asserted that this "rebuild" was being done with "great product, the best product in the world." Per Newsweek, he concluded, "And you know where it’s made? It’s made in the USA. That’s where it’s made. It’s all made right here. So again, Happy Easter, enjoy yourselves.”

Trump has made similar claims in the past about the apparent "depleted" state of the military, according to The Washington Post, who gave this claim three Pinocchios in the past to indicate its falsehood.

However, the day wasn't solely filled with political talk. This year, Melania Trump added two new "Be Best"-themed events to the day's lineup, as a way of incorporating her own initiative as first lady into the day's activities. According to USA Today, these activities included "musical eggs" and a game of "Be Best" hopscotch. Of course, a giant Easter Bunny was present for the event as well, and can be seen clapping along to Trump's various remarks in the videos above.