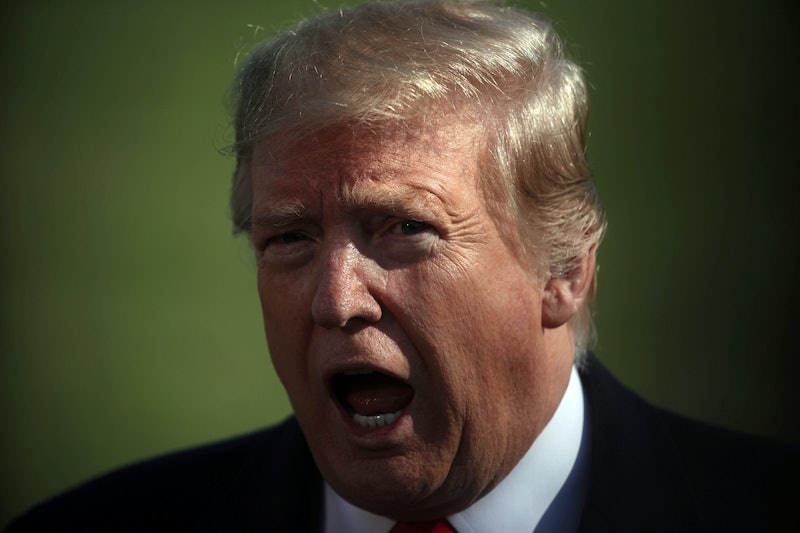 Approval polls have become a spectator sport of sorts during the Trump presidency. President Donald Trump seems to enjoy touting his good results as much as his opponents relish the opportunity to mention the poor ones. But it's unlikely the president will share his so-called "E-Score" with his Twitter followers. Trump's E-Score described him as "aggressive" and "mean," according to a new report from The New York Times — and he had very low scores in several notable positive attributes on the same scoring system.

E-Poll Market Research puts together a poll that tracks public opinion on prominent people in terms of both their appeal and how well known they are. E-Scores aren't public; instead, businesses like advertising and marketing firms and television networks pay a hefty amount to subscribe to the polls — $17,000 a year, according to The New York Times. The paper obtained a poll from December, and the results were not flattering for the president.

"Aggressive" and "mean" were the terms most often used to describe Trump, at 48 and 38 percent respectively. The terms least often connected to him were “sexy,” “impartial,” “handsome,” and “physically fit,” which all scored between zero and 4 percent, according to The Times.

These numbers come in just a little bit worse than his approval rating in the standard political favorability polls. Take the YouGov poll conducted March 30-31, which found that 24 percent of registered voters strongly approve of Trump and 38 percent strongly disapprove. The two types of ratings are used for very different purposes, of course. While public opinion polls like those done at YouGov are ripe for scrutiny in the public eye, a spokesperson for E-Poll Market Research did not condone the E-Score's use in The Times' article.

“We do not approve of the use of E-Poll’s data in this story and cannot confirm or deny the information you were given,” he told The Times.

The E-Score also tracked the public's opinion on Ivanka Trump, whose White House role has become less and less prominent as her father's presidency has gone on. Her name recognition still hovers around 70 percent in the E-Score, though, according to The Times — but it's a different story for her net positive and negative ratings.

Her overall strong positive appeal is just 12 percent, compared with an overall strong negative appeal of 21 percent. After her almost constant presence towards the end of the 2016 campaign, Ivanka had a much smaller role in 2018, as Glamour explained.

These E-Score ratings may not matter in terms of Trump's ability to push his policies through or remain in office. But the president's critics are likely to have a field day with this one.