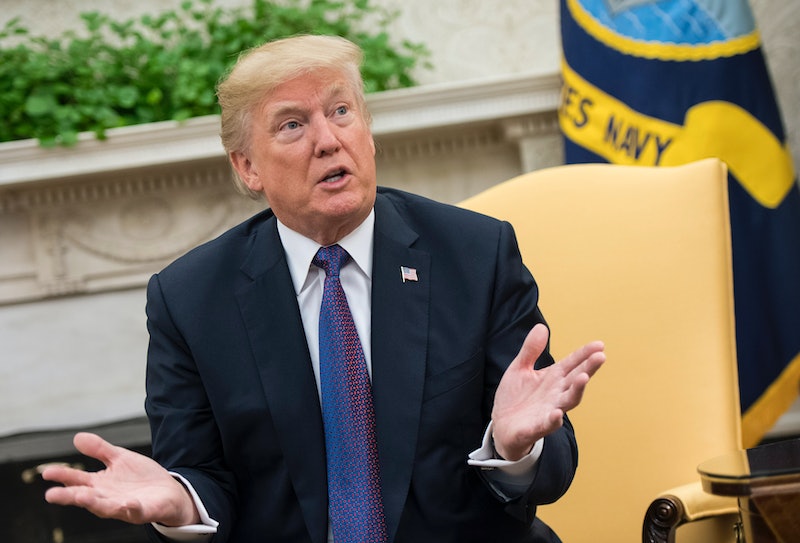 In a couple of tweets that quickly sparked intense backlash, Donald Trump on Thursday suggested that 3,000 people did not die following the hurricanes that hit Puerto Rico last year, despite definitive evidence provided by researchers at George Washington University. In light of Trump's false claims, Lynn Goldman — the expert who oversaw the university's independent study into the death toll — wrote an op-ed for The Washington Post contradicting Trump's conspiracy theories about Hurricane Maria.

On Friday evening, Trump doubled down on his claim that there was "no way" the death toll could have been so high. He previously dismissed the updated death toll of 2,975 as a hoax created "by Democrats in order to make me look as bad as possible." In response to Trump's tweets, Goldman — the Dean of the Milken Institute School of Public Health at GWU — made it clear in her op-ed that "our study was carried out with no interference whatsoever from any political party or institution."

"Make no mistake: The death toll did continue to rise in the months after Maria," Goldman wrote. "Many factors — disruption in transportation, access to food, water, medications, power and other essentials — may have contributed. In interviews, we heard many heartbreaking stories of families struggling to obtain emergency health care, power for medical devices, prescription drugs, or even food and drinking water."

Trump has insisted that 2,975 is an impossible figure, claiming in a tweet earlier this week that there had been "anywhere from 6 to 18 deaths" following the storm. The government's official death count was updated from 16 to 64 following the storm, Vox reported, where it remained until GWU researchers released their findings in August. Trump claimed in his tweets that the death toll increase to nearly 3,000 was therefore "like magic," suggesting that the updated figure had come out of nowhere.

However, as GWU researchers like Goldman pointed out, the official death toll remained at 64 for so long because doctors in Puerto Rico failed to record deaths that were indirectly related to but still a result of Hurricane Maria. Researchers at GWU and Pennsylvania State University used death certificates to calculate the number of deaths caused by the storm, in order to take into consideration factors such as people who were unable to access medical care due to a lack of electricity.

"This is why we were not surprised to find that the highest rates of excess deaths occurred among those living in the poorest municipalities, as well as those over the age of 65, especially men," Goldman explained her op-ed.

Goldman also clarified, in light of the damage Hurricane Florence has already caused in the Carolinas, that "no one administration or political party is responsible for why we still don’t prioritize preparedness even though we are increasingly threatened by large hurricanes." The federal government, nonprofit organizations, first responders, and everyone else who helped address the aftermath of Hurricane Maria deserves to be recognized, Goldman wrote, but there is still more to be done.

"By identifying the preventable causes of these deaths, we can save lives the next time a fierce storm hits," Goldman suggested.

According to CNN, Hurricane Florence has already caused six deaths in North and South Carolina, generated more than 30 inches of rainfall in some affected areas, and stripped nearly one million people in the region of electricity access.